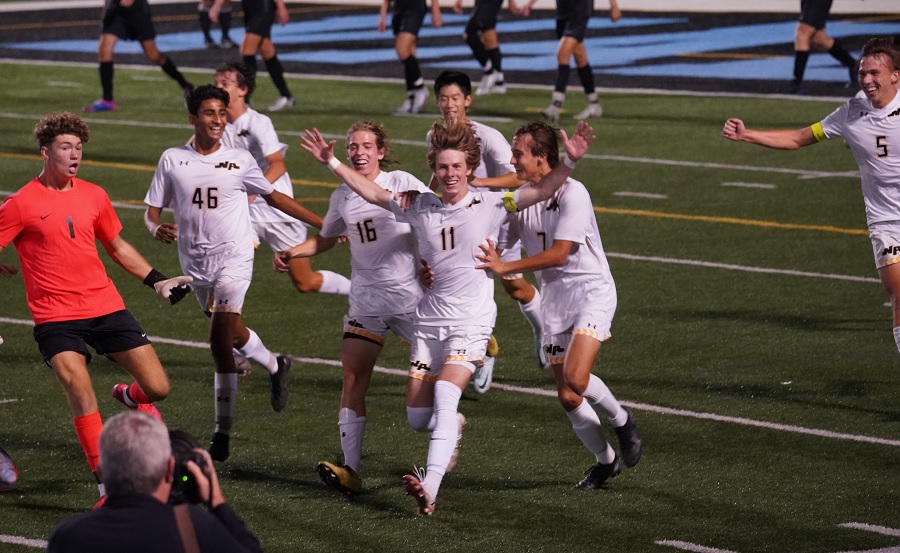 The North Allegheny boys’ soccer team went toe-to-toe with the two-time reigning WPIAL champions in Class 4A and dropped a narrow 3-2 decision in overtime at Seneca Valley on Tuesday night. Max Marcotte netted the golden goal in the 87th minute to keep the top-ranked Raiders undefeated on the season.

In the first half, Seneca Valley scored the game’s first goal in the 33rd minute on a Connor Oros marker, assisted by Marcotte, for a 1-0 lead. Fifth-ranked North Allegheny answered back just three minutes later when Zach Nash scored on a feed from Luke Brady to even the score at 1-1.

Marcotte scored his first of the night in the 46th minute, assisted by Oros, to give the Raiders the lead back, 2-1. Undaunted, the Tigers once again responded in the 63rd minute on a penalty kick. Nash was fouled in the box, giving NA a great opportunity to tie the contest. Senior Ben Christian took the penalty kick, which was saved by Seneca Valley goalie Ryan Krumenacker, but senior Gabi Götz pounced on the rebound to tie the game at 2-2.

In a defensive struggle the rest of the way, regulation ended in a deadlock to force overtime. In the extra session, Marcotte scored an unassisted goal for the game winner in the 87th minute to give the host Raiders a 3-2 win.

Following the overtime defeat, North Allegheny falls to 6-3-1 overall and 4-3 in Section 1-AAAA. Seneca Valley remains unbeaten at 9-0 overall and 7-0 in the section. The Tigers look to bounce back on Thursday night with a home game against Shaler. The contest will be broadcast live by the North Allegheny Sports Network.