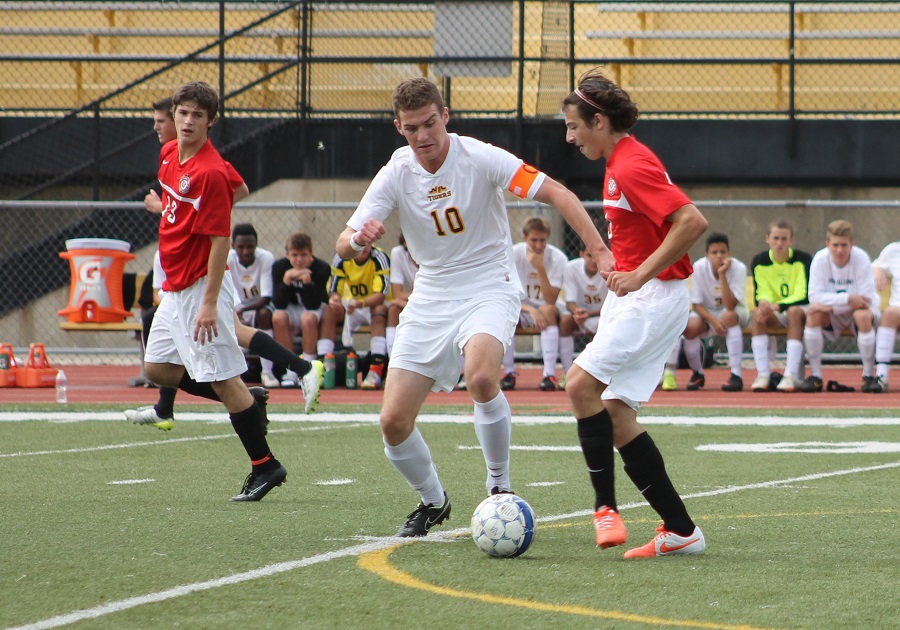 On a rainy evening in Wexford, the Shaler Titans put a damper on senior night at Newman Stadium and dealt the North Allegheny Boys Soccer Team a 3-1 defeat on Tuesday night. With the win, the Titans snapped a six-game losing streak to North Allegheny that dated back to 2011, and also claimed their first section win of the season. Shaler’s win, coupled with a Seneca Valley victory over Hampton, allowed the Raiders to clinch their second straight Section 2-AAA crown.

North Allegheny controlled the pace of play for the vast majority of the game, but the Titans capitalized on their minimal opportunities to take a 2-0 lead by halftime. Ryan Landry fed a pass to Grant Lacey who broke behind the Tigers defense and scored with 20:05 on the first half clock to give Shaler a 1-0 lead. The North Allegheny defense argued that Lacey was offsides on the play, but the officials upheld the Shaler goal.

Less than seven minutes later, Landry set up another Shaler tally by weaving through the right side of the Tigers defense and dribbled a pass to Michael Bagwell on the NA doorstep. Bagwell’s initial shot was blocked by an NA defensemen, but the Shaler sophomore banged home the rebound to bring the score to 2-0, Titans.

In the second half, Shaler took a commanding lead when a shot from the left side snuck through the arms of NA goalie Luke Nolan.  With the ball laying just feet away from the Tigers net minder, Shaler’s Joe Lazzaro booted the ball into the NA net for a 3-0 advantage with 22:34 remaining in the contest.

Despite the deficit, the Tigers continued their all-out assault on the Shaler net and finally broke through with 2:11 to play on a goal by senior Steve Binnig to cut the score to 3-1, Titans. Binnig, who will continue his soccer career at Division III Hope College in Holland, Michigan, was a catalyst for NA’s offense throughout much of the game on senior night.  For his efforts, Binnig was named the Wright Automotive Player of the Game.

Following Binnig’s goal, the Tigers were still in need of two more quick strikes for a miraculous rally to force overtime. Just 20 seconds later, the Tigers almost had their second goal when senior Kevin Dougherty broke through for an open shot from 25-yards out.  However, Shaler goalie Josh Bents denied Dougherty and the Tigers’ last gasp was thwarted as the Titans held on for a 3-1 triumph.

The loss drops North Allegheny’s overall record to 9-6-1 and section mark to 7-3-1. The playoff-bound Tigers hope to bounce back on Thursday night with a road match against the North Hills Indians.  Shaler improves to 4-9-2 overall and 1-7-2 in Section 2-AAA.  The Titans visit Hampton tonight.