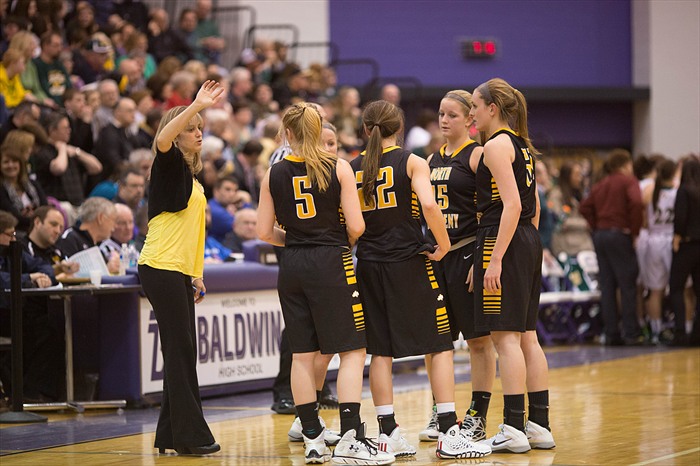 Spring-Ford used a 15-0 second half run to help lift the reigning state champion Rams over the North Allegheny Tigers on Tuesday night, 46-32, in the PIAA semifinals at Chambersburg High School. The second half surge by the Rams turned a 25-20 third quarter lead into a 40-25 fourth quarter advantage for a Spring-Ford team making its third consecutive appearance in the PIAA semifinals.

North Allegheny, hoping for its first ever trip to the state championship game, played tight with Spring-Ford in the first half and trailed by just one point, 10-9, after the first quarter.  However, the inside game of senior Shelby Mueller, the knifing drives by senior guard Sammy Stipa, and the stifling Spring-Ford defense gave the Rams a 22-15 lead at the half. Mueller finished with a dozen and Stipa, a Lafayette-recruit, netted a team-high 14 points. Spring-Ford’s airtight defense limited NA to 22 percent shooting while the Rams were an efficient 44 percent from the field.

In the second half, a Devvin LaBarge three-pointer and a Taylor Lake layup trimmed the Spring Ford lead to 25-20 early in the third quarter.  Spring-Ford responded with the crucial 15-0 run and the Lady Tigers were unable to recover despite a valiant effort in the fourth quarter.  LaBarge poured in a game-high 16 points and four three-pointers, earning the junior guard Wright Automotive Player of the Game honors.  Lake scored nine points for NA and was a force on the offensive glass.

North Allegheny ends the season with a 25-3 record and will return several key starters next season, including Abby Gonzales, Devvin LaBarge and Taylor Lake. Spring-Ford improves to 27-6 and will try for back-to-back state titles on Friday night at 6:00 pm in Hershey. The Rams will face Cumberland Valley in a rematch of last year’s state title game.