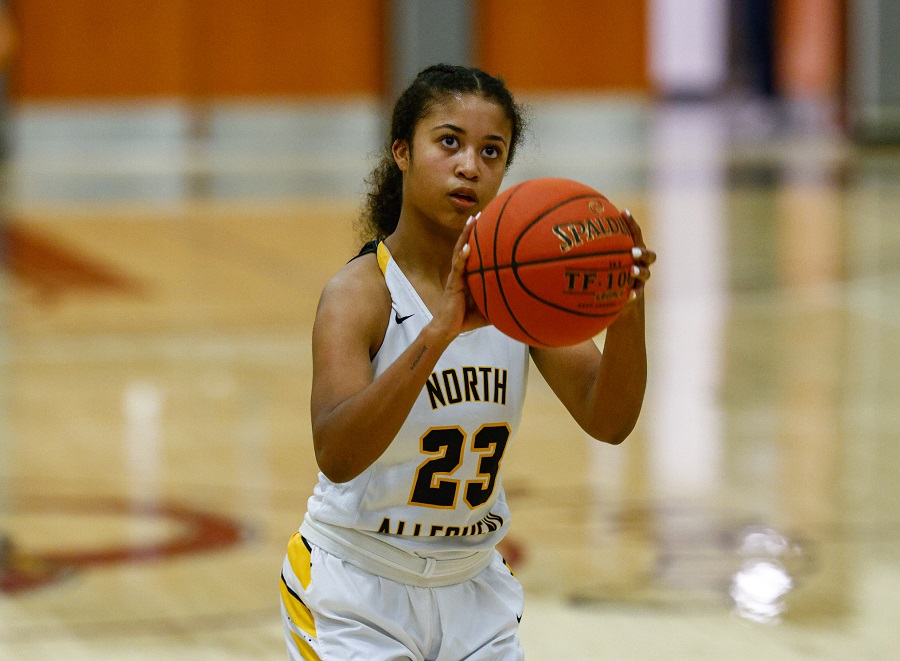 The reigning PIAA Class 6A champions opened the 2021-2022 season on Friday night with a 40-35 win over the Bethel Park Black Hawks at the Oakland Catholic Tip-Off Tournament. After missing all of last season with a knee injury, senior Taylor Rawls made a triumphant return to the starting lineup and led the Tigers with 20 points on her way to Wright Automotive Player of the Game honors.

In a seesaw game of runs, it was Bethel Park who had the better of the play in the first quarter and opened up a 15-3 lead. While the Tigers looked sluggish with numerous turnovers in the opening stanza, North Allegheny couldn’t miss in the second quarter and used a 23-0 run to take a 26-15 lead at the half. Rawls led the charge for NA with 15 points and five 3-pointers in the second period alone. Junior Jasmine Timmerson added seven points in the first half and totaled double figures with 11 on the evening.

The pendulum swung back toward Bethel Park in the third quarter as the Black Hawks put together a 13-2 run that tied the game at 28-28. Wheeling University commit, Emma Dziezgowski, sparked the Black Hawks with nine points in the second half and finished with a team-high 12 points.

Seton Hill University commit, Emma Fischer, opened the fourth quarter with a 3-pointer to give NA the lead back, 31-28. Despite a pair of free throws from Dziezgowski that cut the score to 31-30, North Allegheny never relinquished the lead and fended off Bethel Park en route to the win. With NA leading 38-35 with eight seconds remaining, Rawls hit a pair of free-throws to put the game away and helped the Tigers claim a 40-35 triumph.

With the win, North Allegheny extends its winning streak to 11 in a row dating back to last season. The Tigers will take on Penn Hills in day two of the Oakland Catholic tip-off tournament on Saturday at 11:30 am. The game will be broadcast live via the internet on the North Allegheny Sports Network.