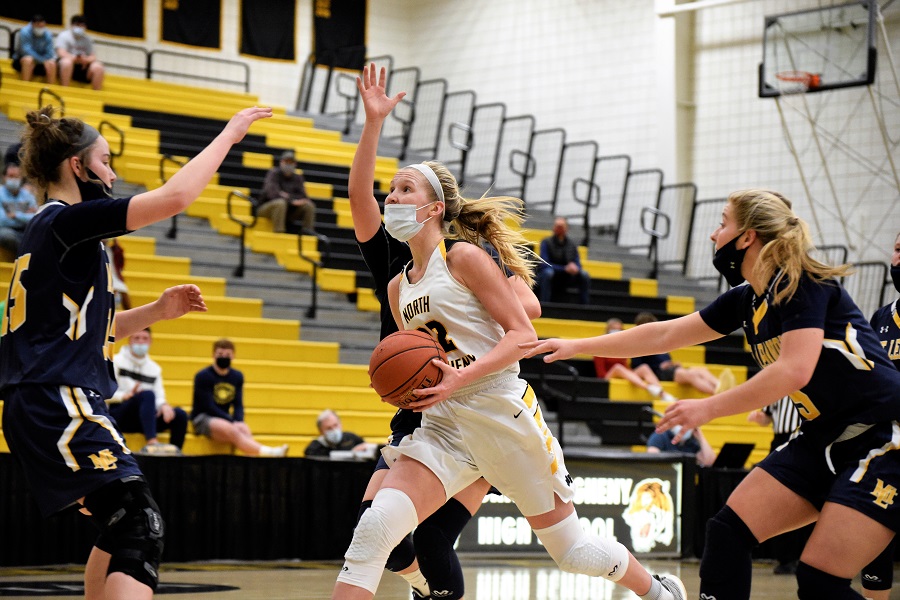 The North Allegheny girls’ basketball team punched its ticket to the WPIAL championship game for a sixth consecutive season thanks to a 49-36 victory over the Mt. Lebanon Blue Devils on Wednesday night in the WPIAL Class 6A semifinals.

The Tigers matched up with the Blue Devils in the semifinals for the third time in the last five seasons. Like the two prior playoff meetings, NA prevailed but not without a valiant effort from a venerable foe.

In the first quarter, Mt. Lebanon held an 8-4 lead before the reigning WPIAL champs used a 17-2 run to take a double-digit advantage. The Tigers opened up a 21-10 lead with strong shooting from the perimeter. Sophomore Jasmine Timmerson poured in three 3-pointers in the first half, while teammates Emma Fischer, Cam Phillips and Paige Morningstar added one trey apiece en route to a 29-15 lead at halftime.

North Allegheny ballooned the lead to 19 points midway through the third quarter, bringing the score to 40-21 before Mt. Lebanon staged a rally. On the strength of a 12-0 run, the Blue Devils chipped away with timely 3-pointers from senior Morgan Palmer. On the night, Palmer poured in four 3-pointers and netted a team-high 16 points.

With the NA lead trimmed to 40-33, the Tigers received a big shot in the arm from Fischer with a timely 3-pointer, stretching the NA lead to 43-33. Fischer posted nine points on three treys.

Following the Fischer 3-pointer, the Tigers regained control and senior Lizzy Groetsch converted six free throws down the stretch to help North Allegheny preserve a 49-36 win. Groetsch tallied a game-high 19 points and played a key role in shutting down Mt. Lebanon junior guard Ashleigh Connor. Boasting a number of Division I offers, Connor was held in check with just seven points and fouled out in the fourth quarter. For her efforts on both offense and defense, Groetsch was named the Wright Automotive Player of the Game.

A key figure in the paint for NA was Morningstar, who netted seven points and defended the NA basket with numerous blocks on Mt. Lebanon shooters.

With the win, North Allegheny improves to 23-1 overall, while Mt. Lebanon’s season ends with a 17-4 record. The Tigers will take on the Upper St. Clair Panthers on Saturday night at 8:00 pm in the WPIAL Class 6A championship from the new AHN Arena in Peters Township.