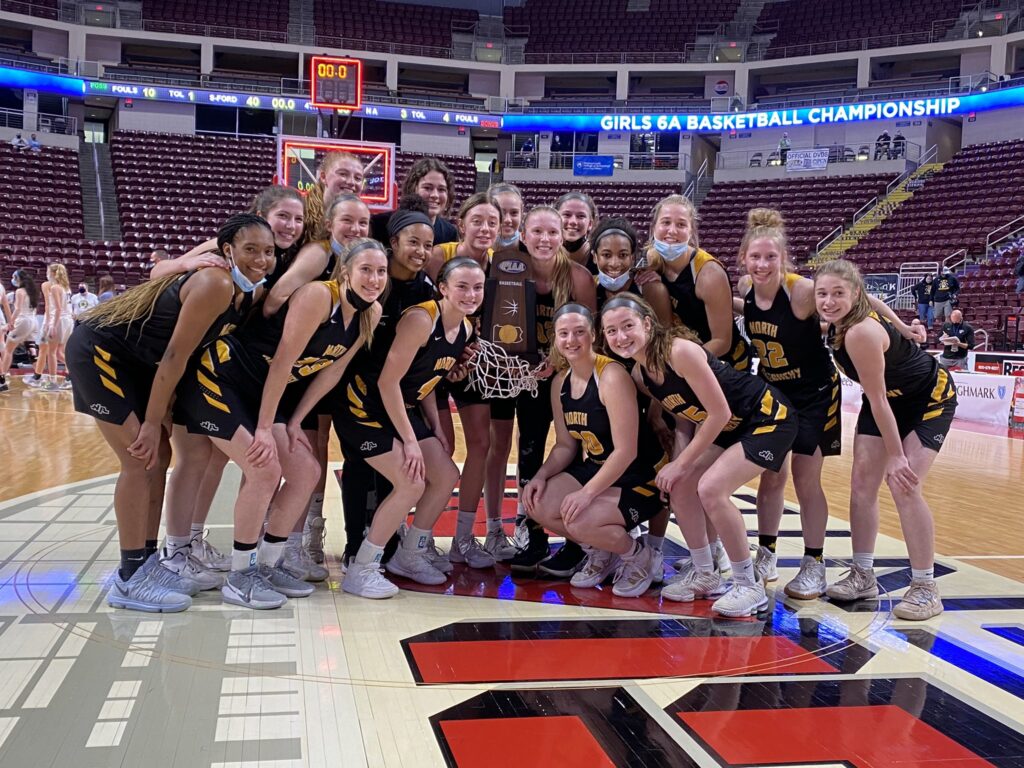 The North Allegheny girls’ basketball team won its first-ever PIAA championship on Friday night with a 55-40 victory over the Spring Ford Rams in the Class 6A title game at the Giant Center in Hershey. The victory culminates a dazzling 27-1 season for the Tigers.

Appearing in the state championship game for the second time, and first since 2017, the Tigers led most of the night and trailed only once in the game, 3-2 in the first quarter on a 3-pointer by Spring Ford senior Emily Tiffan.

North Allegheny opened up a 17-11 lead after the first quarter thanks to some hot 3-point shooting, including treys from Paige Morningstar, Lizzy Groetsch and Cam Phillips. The NA lead swelled to 19-12 before Groetsch, a University of Pennsylvania commit, picked up her third foul midway through the second period. Tiffan led the comeback effort for Spring Ford with 11 of her 14 points coming in the first half and the Rams trimmed the NA lead to 24-21 by intermission.

While the Tigers lead was cut to three points, NA held firm with Groetsch on the bench throughout most of the remaining minutes in the second quarter and limited the Rams with a 1-2-1 zone.

In the third quarter, the foul trouble swung toward Spring Ford with Villanova commit Lucy Olsen picking up three fouls early in the third quarter. As they have throughout the season, the Tigers capitalized on the opportunity and used an 8-1 run to grab a 32-22 lead.

To their credit, Spring Ford, who was searching for its second PIAA championship and first since 2013, cut the NA lead to 32-29 midway through the third but could come no closer. North Allegheny pulled away in the fourth quarter for a 55-40 win thanks in part to the baseline drives of Groetsch and clutch free-throw shooting from Morningstar. Groetsch tallied a game-high 22 points and Morningstar netted 16 points, converting 8 for 10 at the charity stripe.

Not to be outdone, sophomore Jasmine Timmerson matched up most of the night with Olsen and limited the Rams top scorer, who averages 19.6 points per game, to just three field goals and 14 points. Two of Olsen’s 3-pointers came with SF in desperation mode in the waning minutes of the game. 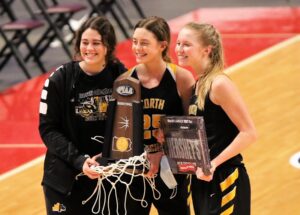 The PIAA championship victory serves as the pinnacle of the high school careers for decorated seniors Groetsch, Morningstar and also Maddie Reardon, who missed the game due to injury. All three seniors were selected as the Wright Automotive Players of the Game. The senior class finishes its four-year run with a record of 103-8, three WPIAL championships and one PIAA crown.

North Allegheny caps the year with a 27-1 record, while Spring Ford suffers its first loss and concludes the season with a 24-1 record. Congratulations to the North Allegheny girls’ basketball team, head coach Spencer Stefko and the entire coaching staff for a memorable and championship season.