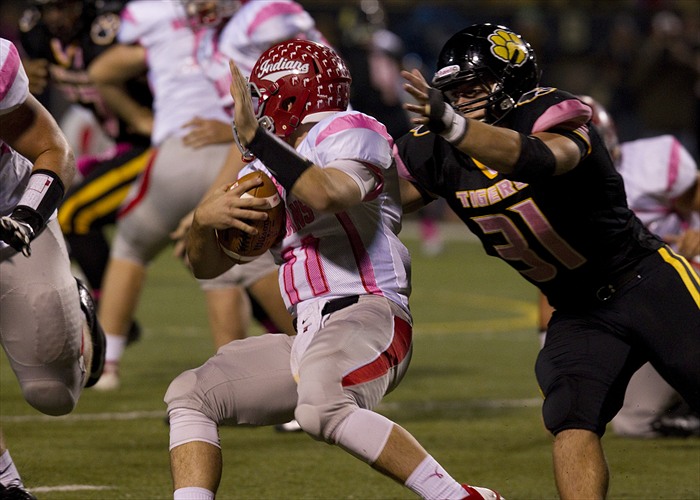 When North Hills senior Kindahl Taylor rushed for a 21-yard touchdown in the fourth quarter it marked the first time since 2010 that the Indians scored a touchdown against the North Allegheny defense. That touchdown by Taylor came too little, too late for the Indians as the Tigers already had the game, and third place in the Northern Eight Conference, well at hand.  In the 55th edition of one of the fiercest rivalries in Class AAAA, North Allegheny dealt North Hills a convincing 31-7 defeat.  The Tigers lead the all-time series, 29-26, and have won four straight against the Indians.  Over the span of the four-game winning streak, the Tigers have outscored the Indians 121-7.

On its second possession of the game, the North Allegheny offense drove 74 yards on 14 plays and capped the drive on an 8-yard touchdown pass from Jeff Clemens to tight-end Paul Blendinger with 1:52 to go in the first quarter to give the Tigers a 7-0 lead.

Midway through the second quarter, senior Clay Byerly intercepted a Jake Bruder pass and returned the ball 43 yards to the North Hills 2 yard line.  One play later, sophomore running back Michael Pope scored on a 2-yard run for a 13-0 advantage with 6:37 remaining before halftime.  The Tigers surprised the Indians with a successful two-point conversion pass from Riley Trueman to Clemens to bring the score to 15-0, North Allegheny. Before intermission, kicker Seth Mancuso tacked on a 24-yard field for an 18-0 lead.

The North Hills offense could muster very little against the NA defense, posting only 50 yards by halftime and 62 yards through three quarters. The Tigers defense dominated the line scrimmage and kept the elusive Bruder in the pocket where he was less dangerous.  Bruder passed for just 28 yards and completed only three passes in the game.  North Allegheny outgained North Hills, 406-144, with the majority of the Indians yardage coming in the fourth quarter.

With North Hills’ offense held in check, the Tigers put the game away in the second half with two short touchdown runs by Clemens in the third and fourth quarters. Clemens completed 7 of 15 passes for 138 yards and added 51 yards on the ground to go along with his three total touchdowns.  Pope, with his slashing runs, gashed the Indians for 110 yards on 12 carries and a touchdown.  For his efforts, the North Allegheny Sports Network anointed Pope as the Wright Automotive Player of the Game.

Winners of six in a row, North Allegheny improves to 7-2 overall and 5-2 in the Northern Eight Conference, assuring the Tigers a home playoff game next week at Newman Stadium. North Hills falls to 6-3 overall and 4-3 in conference play.  Both teams have qualified for the Quad-A playoffs and will await their opponents when the WPIAL brackets are unveiled on Monday night.  For a look at the final team and individual stats from the NA-NH game, click here.