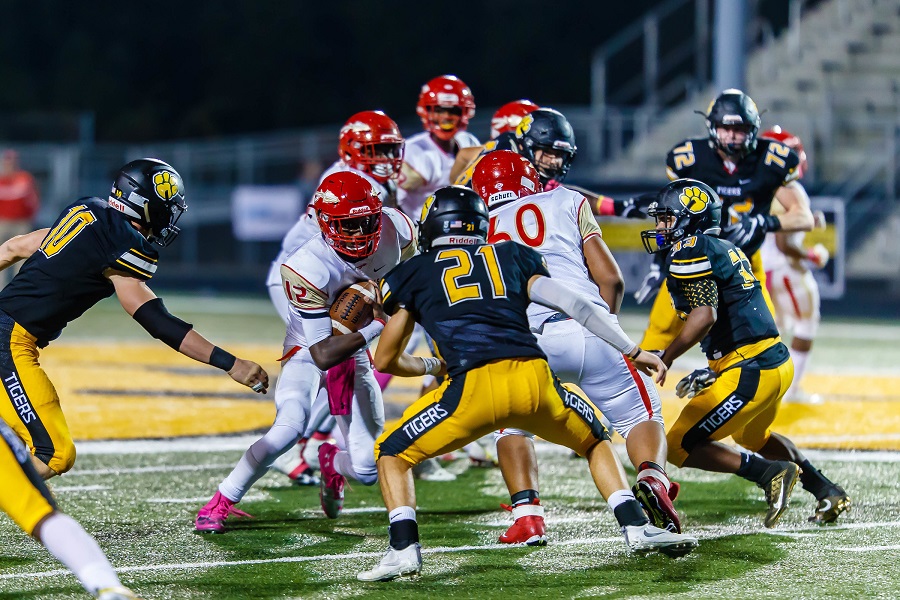 The tone was set early on by the NA defense and cornerback Joey Porter Jr. intercepted a Mathis pass at the North Allegheny 21-yard line to end Penn Hills’ first possession. The Tigers marched 79 yards in six plays and scored on a 19-yard touchdown pass by Luke Trueman to receiver John Vardzel for a 7-0 lead with 1:33 on the first quarter clock.

In the second quarter, Mathis could not reel in a high shotgun snap and the ball was recovered by North Allegheny’s King Gildon at the PH 16-yard line. The Tigers capitalized on the turnover and scored when Trueman tossed a 19-yard touchdown pass to running back Turner White for a 13-0 lead with 6:12 left in the half. The extra point failed.

The Indians opened the third quarter with a lengthy possession but the drive stalled at the NA 7-yard line and Penn Hills settled for a field goal attempt by Shayne Meyers. Unfortunately for Penn Hills, the drive yielded no points at all when Myers’ kick was blocked. North Allegheny followed with an 80-yard drive on seven plays that culminated on a 1-yard by Trueman for a 20-0 lead with 5:40 remaining in third quarter. Trueman led the Tigers with 75 yards rushing, 80 yards passing and three total touchdowns on his way to Wright Automotive Player of the Game honors.

Following another interception and return by Porter to the Penn Hills 43-yard line, North Allegheny cashed in three plays later on a 10-yard touchdown run by White to balloon the Tigers lead to 27-0 with 27 seconds remaining in the third. Along with Porter’s two interceptions, senior linebacker Alex Hays also pirated a Mathis pass.

The Penn Hills offense finally found the end zone early in the fourth quarter on a 19-yard scoring pass by Mathis to Michigan State recruit Julian Major with 9:38 to play. Terry Smith ran in the two-point conversion to trim the NA lead to 27-8. Mathis finished with 12 completions on 22 attempts for 165 yards, two touchdowns and three interceptions.

North Allegheny’s next drive went three-and-out and a bad snap on the punt led to a Penn Hills possession at the Tigers 4-yard line. Following a penalty, the Indians later scored on an 11-yard pass from Mathis to Dante Cephas with 5:54 remaining. The two-point pass by Mathis to Daquan Hardy was good and the Indians were suddenly back in the contest trailing North Allegheny, 27-16.

The Tigers were again forced to punt on their next drive but Trueman’s punt with just over three minutes remaining was fumbled by Indians returner Anthony Grimes. The ball was recovered by Luke Collella deep in Penn Hills territory and the Tigers ran out the waning minutes to secure a 27-16 victory.