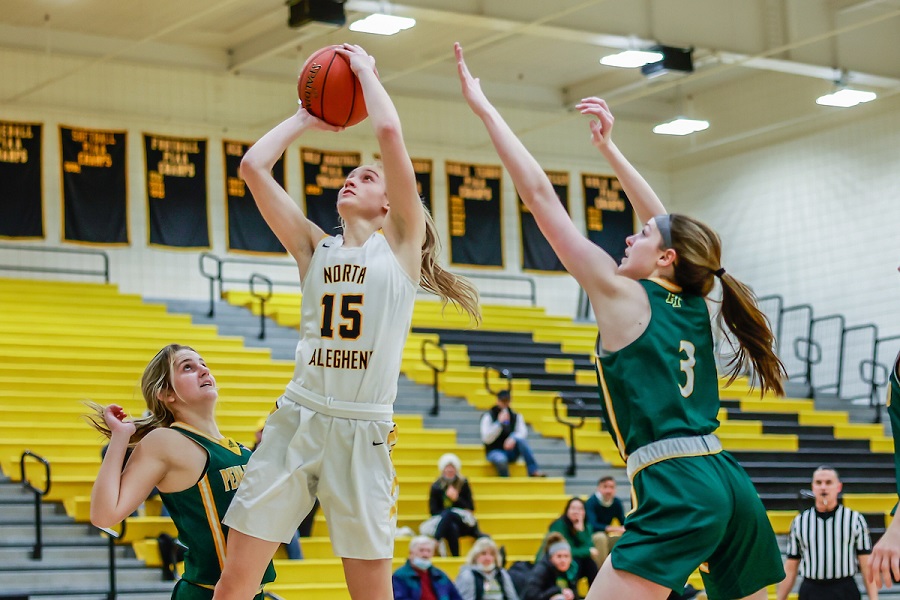 Tigers Defeat Penn-Trafford For 25th Win In A Row

It was another Class 6A Section 1 match-up for North Allegheny at home and it turned out to be another win for the Tigers as they bested Penn-Trafford for the second time this season 50-38.

The Tigers scored the first five points of the game on their way to an 8-2 lead which ballooned to ten after the first quarter. North Allegheny widened the gap to 33-15 at halftime and never looked back.

Jasmine Timmerson led the way for NA with 16-points and the junior played her typical game, contributing in all phases, offensively with the game-high point total and several fantastic assists, on the boards with her rebounding and with great pressure-defense and several steals.

The Tigers made six three pointers on the night, with Timmerson and junior Cam Phillips leading the way with two apiece.

North Allegheny improves to (15-0, 9-0) with the win. The impressive winning streak against WPIAL competition has now reached 25 games, dating back to January 2, 2020.

The only other Tiger to reach double figures was Lydia Betz, who help key North Allegheny’s quick start. The sophomore had an early rebound and steal, hit a three-pointer in the second quarter to finish with 11-points and Betz was selected as the Wright Automotive Player of the Game.

The Tigers are next in action on Thursday night as they visit Norwin for the section lead. The Knights, the last WPIAL team to defeat North Allegheny, are a game behind the Tigers. The two teams played a great game in early January when the Tigers overcame a 10-point deficit in the fourth quarter to win 46-43 on a buzzer beating Timmerson trey.

Thursday’s 7:30 tip-off from Norwin can be followed courtesy of our sister network, the Trib Live High School Sports network.