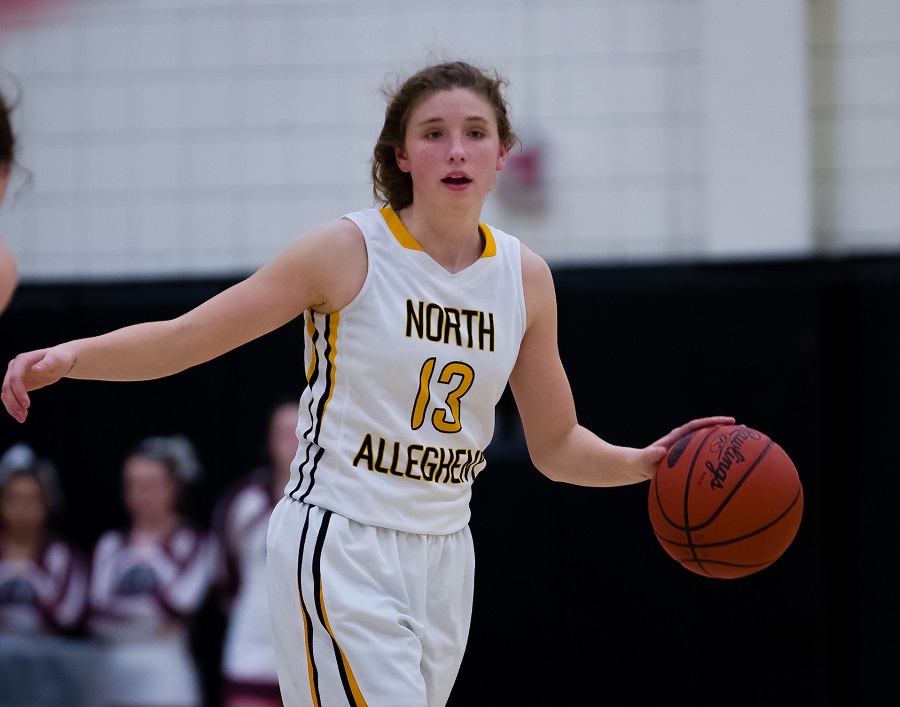 North Allegheny matched a program record for most wins in a single season with a 50-34 triumph over the Hempfield Spartans in the opening round of the PIAA girls’ basketball tournament. The Tigers picked up their 25th win of the campaign with a solid team effort to vanquish the Spartans. North Allegheny last won 25 games during the 2013-14 season when the Tigers went 25-3.

Making their fourth consecutive appearance in the state playoffs, the WPIAL champion Tigers were facing the Spartans for the second time in a two-week span. North Allegheny stifled the Spartans in the previous meeting in the WPIAL quarterfinals and limited them to 16 points in a one-sided victory.

On Friday night at Plum High School, the rematch began in similar fashion with NA opening up an 11-5 lead in the first quarter. The Tigers increased the lead in the second quarter and held a 29-11 advantage at intermission. Junior guards Piper Morningstar and Courtney Roman scored eight points apiece and combined for four 3-pointers in the first half. Both players finished the night in double figures with 10 points each.

The Tigers opened the third quarter with a 3-pointer by Hailey Zeise to take a 32-11 lead, their largest of the game. It appeared NA might coast to the PIAA second round before Hempfield rallied back behind the perimeter shooting of Michelle Burns. Hempfield’s senior guard poured in five 3-pointers and scored 15 of her 17 points in the second half. The Spartans cut their deficit to nine points on a trey by freshman Sarah Liberatore to bring the score to 38-29 midway through the fourth quarter.

However, Hempfield could come no closer as North Allegheny pulled away in the waning minutes for a 50-34 victory. Sophomore Rachel Martindale scored a team-high 12 points and Zeise had a fabulous second half to help secure the win. Doing most of her damage after halftime, Zeise tallied seven points, five rebounds, five assists, four steals and two blocks. For her efforts, Zeise was named the Wright Automotive Player of the Game.

North Allegheny improves to 25-1 on the season and advances to the PIAA second round where the Tigers will have another playoff rematch, this time with the Mt. Lebanon Blue Devils on Tuesday night. The game will be broadcast live via the internet on the North Allegheny Sports Network. Hempfield’s season comes to a close with a 14-10 record.