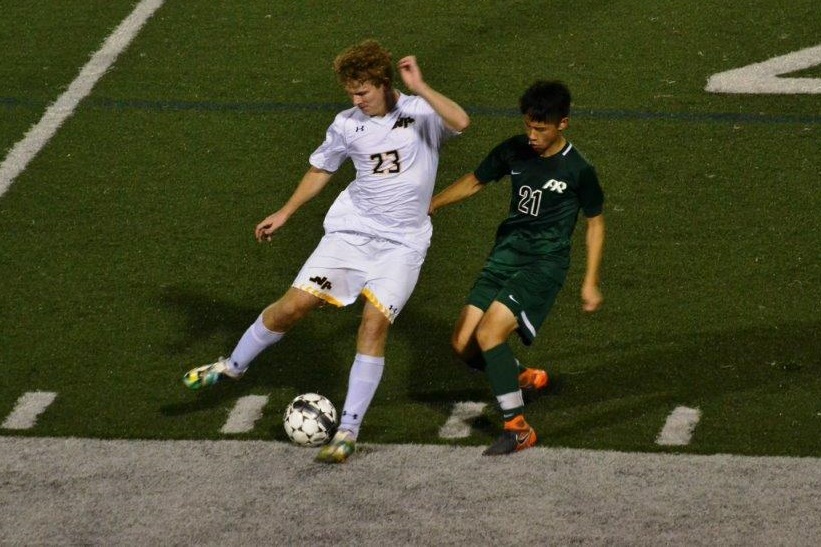 The North Allegheny boys’ soccer team traveled to Pine-Richland hoping to hold onto a share of the top of the table in Section 1-4A.  The Rams did not comply and scored a late goal with two minutes remaining in the game, beating the Tigers 1-0.  It was their first victory over NA in nine matches dating back to 2014.

The game started slowly with both teams trading equal offensive possessions and opportunities through the first 20 minutes.  Juniors Sam Passodelis and Luke Anderson had the best scoring chances early on, but PR goalie Tom Fest made saves on each.  Later, junior J.D. Runatz lofted a sharp-angled volley off the left crossbar that could not be finished.  Senior goalie Devon Angermeier made multiple quality saves to keep the Tigers even at 0-0 at the end of the first half.

In the first 15 minutes of the second half, the Rams had a slight edge in possession time, however, they were still unable to penetrate the tough Tiger back line.  Mid-way through the second half, senior Sam Wilson delivered a well-placed corner kick that found senior Nick Bridges on the back post.  A Bridges header then sailed wide of the goal. Shortly after, junior Will Cinker found junior Sam Maldia with a nice through ball, but the PR goalie made a strong save on Maldia’s near-in shot.  As the clock wound down, it appeared OT was inevitable, until a loose ball caromed Pine’s way and found Abhinav Venkatakrishnan streaking behind the Tigers defense with a clear shot to the net.  Venkatakrishnan buried a well-placed strike to the bottom right corner.  The Tigers battled fiercely for the final two minutes but could not get the even-up mark.  The Tigers had the edge in corner kicks 7-2 while Pine had the advantage in direct free kicks, 16-12, and shots on goal, 9-8.