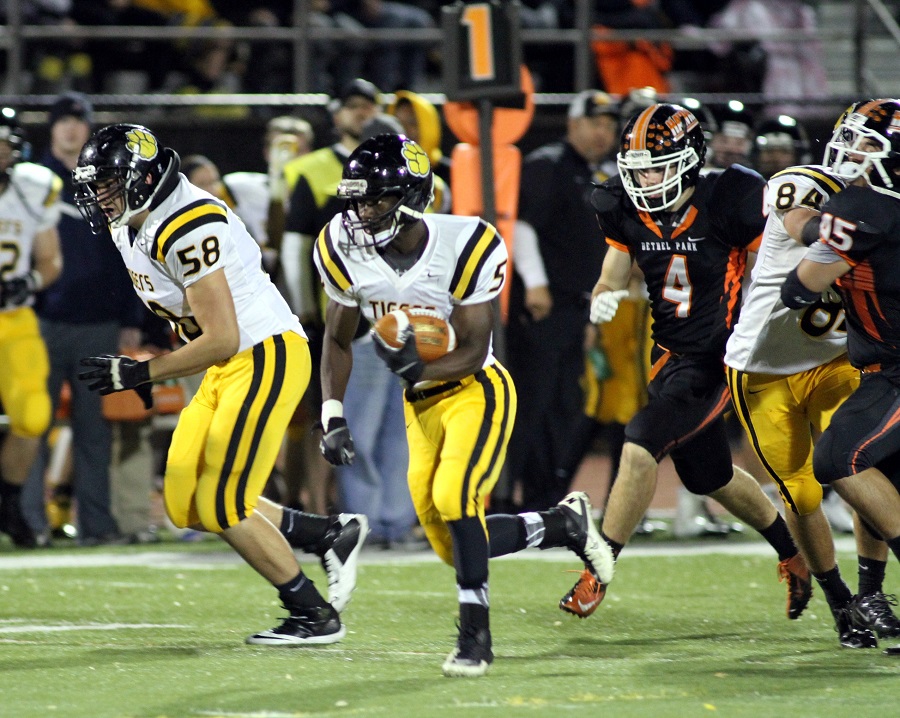 Senior running back Isaac Weaver rushed for three second half touchdowns and the North Allegheny defense pitched its second consecutive shutout as the reigning three-time WPIAL champion Tigers blanked the Bethel Park Blackhawks, 28-0, in the opening round of the Quad-A playoffs.

The eighth-seeded and host Black Hawks were playing without starting quarterback Levi Metheny who donned a large cast on his right arm during pre-game warm ups as Bethel Park turned to senior Sam Polen as the starting signal caller.  Midway through the first quarter, Polen and the Black Hawks marched the football on a 10-play drive to the North Allegheny 3-yard line for a 1st and goal.  Moving the football primarily on the ground on the 39-yard drive, Bethel Park ran three straight times but were stopped at the NA 1-yard line. On 4th and inches, running back Alex Minton was stopped for a 2-yard loss by NA lineman Paul Blendinger and the Tigers defense held for an important goal-line stand.

Early in the second quarter, the Black Hawks appeared to have scored the game’s first touchdown when Minton raced into the end zone for an apparent 28-yard scoring run, but a holding penalty brought the touchdown back keeping the game scoreless.  Bethel Park ultimately turned the football over on downs at the NA 27-yard line with 8:32 to go in the quarter.

As the defensive struggle continued, the Tigers mounted a drive with a 4:58 remaining in the first half.  On the march, senior quarterback Cage Galupi made two key completions, a 26-yard pass to tight-end Paul Blendinger and a 35-yard strike to receiver Elijah Zeise at the Bethel Park 1-yard line.  One-play later, Galupi plunged into the end zone on a QB keeper at the Tigers had a 7-0 lead with 1:39 to play in the second quarter.

In the second half, the Tigers took command of the game behind a defense that forced three turnovers and the running of Isaac Weaver. The senior tailback scored on jaunts of 1, 60, and 40-yards to give North Allegheny a 28-0 lead by the 9:12 mark of the fourth quarter. Weaver finished the night with six carries for 121 yards, averaging 20-yards per carry.  For his efforts, Weaver was named the Wright Automotive Player of the Game.

Defensively, Layne Skundrich led the Tigers with nine tackles and a sack.  Zach Koegler collected a sack, strip and fumble recovery, to go along with eight tackles.  Reilly Sullivan notched eight tackles with a sack. Senior Giosue Bochicchio also recovered a fumble in the shutout victory. The Tigers held Bethel Park to just 176 yards of total offense.  Running back Alex Minton was a bright spot for the Black Hawks, rushing for 90 yards on 21 carries.

With the win, North Allegheny improves to 7-3 on the season, while Bethel Park’s season ends for the second straight year with a loss the Tigers.  Bethel Park finishes 6-4 for the season. Up next for the Tigers are the top-seeded Upper St. Clair Panthers next Friday night.  The site is yet to be determined.  The game will be broadcast live on the North Allegheny Sports Network.