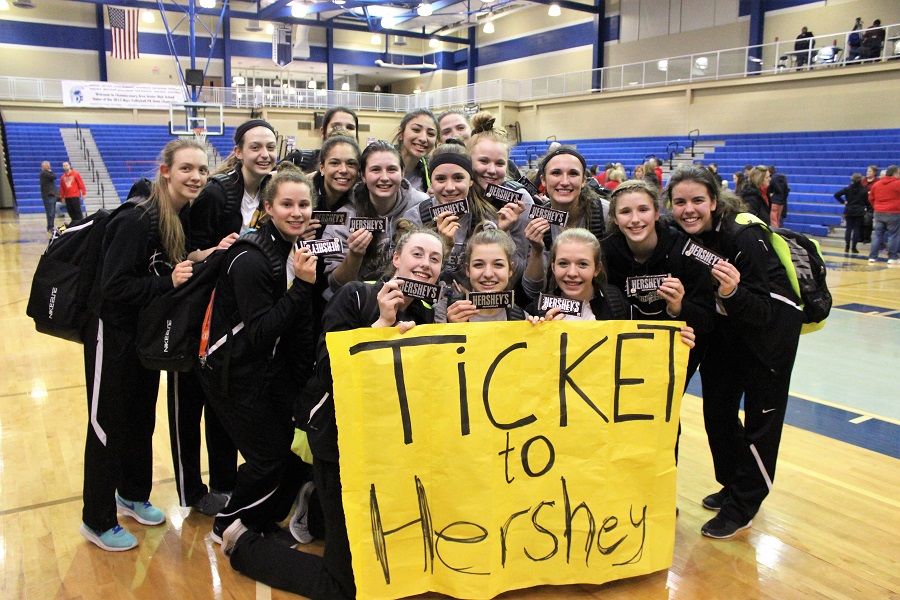 The North Allegheny Lady Tigers were triumphant in their quest as they stamped their ticket to Hershey after 32 minutes of a first class defensive battle. Points were at a premium and the fouls were minimal especially in the first half considering the stout defense by both teams.  Souderton jumped out to a 5-0 lead which would hold as the largest lead by either squad in the contest. The run was snapped when junior Piper Morningstar hit a three pointer to draw the Lady Tigers within two.  She ended the first quarter with 6 of NA’s 7 points as the Tigers trailed, 9-7, after eight minutes.

In the second quarter, sophomore Rachel Martindale went to work on offense knocking down a big 3-pointer as she tallied six points in the stanza.  Morningstar added a 3-ball of her own while senior Haley Zeise knocked down a jumper and the teams went to the locker room knotted at 18-18. Struggling at the line in the first half, the Lady Tigers missed several chances to maintain a lead.

In the fourth quarter the atmosphere became electric and the tide turned when the Tiger faithful rose to their feet chanting “defense” which would become the theme of the night.  There was only one field goal made in the fourth quarter and it was a huge and one converted by junior Madelyn Fischer who also tallied 9 boards.

As time was winding down it became eerily similar to last year’s PIAA semifinal when the Lady Tigers fell on a last second free throw.  This year’s contest would end in the same fashion but this time with the Lady Tigers at the line knotted at 31-31. With seven seconds on the clock, sophomore Brynn Serbin took the ball across the time line determined to get the ball into the hands of Martindale which she did.  With only 0.9 left on the clock, Martindale was fouled and would go to the line with a chance to send her team to Hershey and the PIAA 6A State Championships.  Souderton would call their final timeout and Martindale would have to think about the one and one opportunity.  With ice in her veins she drained the front end to give the Lady Tigers the 32-31 lead.  She would miss the second seemingly intentionally and Souderton had no chance to sink a desperation shot from 75 feet.

With a team-high four steals, and the game winning free throw, Rachel Martindale was named the Wright Automotive Player of the Game. With the win the Lady Tigers continue their impressive season and improve to 28-1.  They will face Boyertown on Friday at 6 p.m. at the Giant Center in Hershey, PA for the PIAA Class 6A state title.  The game will be broadcast by the North Allegheny Sports Network.