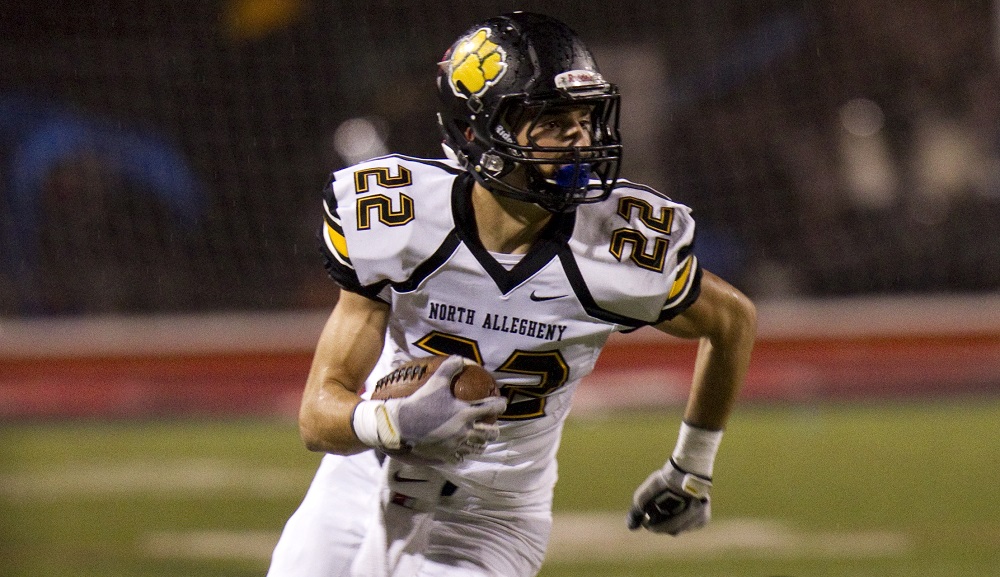 Having already secured the 29th playoff berth in program history, the North Allegheny Tigers (7-1) can clinch a share of the Northern Eight Conference title with a win at rival North Hills (3-5) tonight at Martorelli Stadium. The rivalry between North Allegheny and North Hills has gone from sizzle to fizzle in recent years as the Tigers have won four straight. Not only do the Tigers boast a four-game winning streak against the Indians but NA has outscored North Hills 121-7 in that span.

The black and gold will try to extend their head-to-head streak against a North Hills team that locked up a playoff berth last week with a 35-7 win over the Shaler Titans. The Indians totaled 358 total yards against the Titans, with 346 of those yards coming on the ground. The focal point of the North Hills offense is junior running back Nick Santucci who rushed for 219 yards last week and three touchdowns. For the season, Santucci has totaled 545 yards and seven touchdowns. Also the team’s leading receiver, Santucci has hauled in 35 passes for 426 yards and four scores. There’s little doubt that the North Allegheny game plan on defense will center around trying to stop the fast and shifty Santucci.

Winners of six in a row, North Allegheny is coming off a 58-14 non-conference victory over the Latrobe Wildcats. In the win, the Tigers invoked the mercy rule for the fourth straight week and totaled 426 yards of offense. Junior running back Michael Pope was the top ground gainer with 138 yards and two touchdowns and has rushed for 426 yards and nine scores. Junior quarterback Ethan Maenza scored three touchdowns last week and has passed for 620 yards and six touchdowns, to go along with 617 rushing yards and six more scores. Pope and Maenza, along with senior quarterback Riley Trueman, will face a North Hills defense that has uncharacteristically struggled this season, allowing an inviting 25 points per game. The Tigers average 37 points per game on offense and will look to punch holes in the Indians defense.

Tonight is the 56th all-time meeting between these two schools. The Tigers picked up a 31-7 win over the Indians last season at Newman Stadium. NA’s last visit to Martorelli stadium resulted in a 31-0 pasting of North Hills in 2013. Kickoff for tonight’s game is set for 7:30 pm. The pregame show will begin at 7:10 pm, including a pregame interview with North Allegheny head coach Art Walker. To listen to tonight’s broadcast, click here.