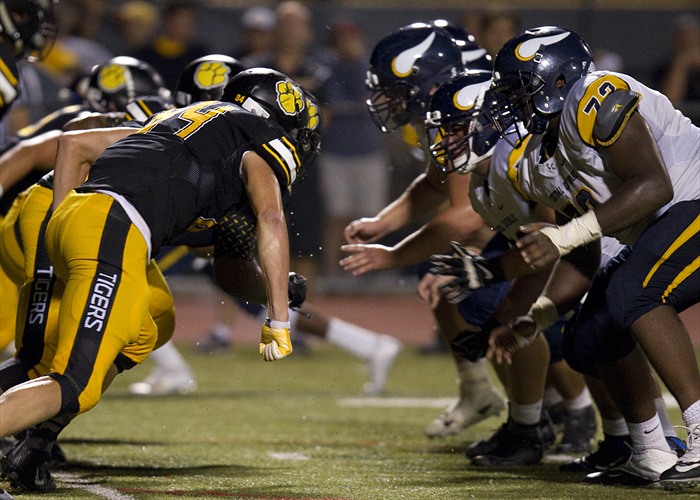 For the second time this season, the North Allegheny Tigers (9-1) will take on Northern Eight Conference rival Pittsburgh Central Catholic (9-1) but this time with a trip to the WPIAL semifinals at stake. In week three, North Allegheny defeated the Vikings, who ranked No. 1 at the time, 24-17.  Tigers quarterback Riley Trueman scampered 28 yards for the game winning touchdown with 35 seconds remaining.

Since that contest in week three, Central Catholic has not lost and has won seven in a row, including a huge week eight triumph over reigning Quad-A champion Pine-Richland, 35-28. The Vikings are an impressive team that averages 42 points per game on offense and allows just under 10 points per game on defense.  Extremely conservative to start the season, the Vikings offense has opened up somewhat thanks to the maturity displayed by quarterback Troy Fisher. The sophomore signal caller has completed 69 of 122 passes for 1,030 yards, 14 touchdowns and zero interceptions. Despite the advancement of their quarterback, Central Catholic remains a run-first offense with Ronnie Jones and Vinny Emanuele carrying the football. Jones is a “home-run hitter” who rushed for 1,087 yards and 14 touchdowns while Emanuele has toted the ball for 705 yards and 10 scores. The offensive line tips the scales at an average of 279 pounds and provides the rushing lanes for Jones and Emanuele.

The ferocity and talent of the Central Catholic defense is well known at this point in the season, with eight D-I recruits. While the players remain the same, the Vikings have made some changes schematically since the week three game with the Tigers. Central Catholic likes to stack the box to stop the run, something that will likely be employed tonight against a North Allegheny team that wants to set the tone with the ground game.

Similar to the Vikings, North Allegheny possesses an explosive offense that averages 39 points per game and a bevy of ball carriers.  Senior Ijhad Bonner was added to the mix last week, rushing for 95 yards and two touchdowns. Junior scat back Michael Pope is the team leader in touchdowns with 10 to go along with his 609 yards rushing. Junior quarterback Ethan Maenza is the team’s leading rusher and passer with 705 yards and 732 yards, respectively, and 14 total touchdowns. Senior signal caller Riley Trueman has added 280 yards passing and four touchdowns, in addition to 341 yards rushing and five scores. North Allegheny’s leading receiver is Matt Sell who has hauled in 26 passes for 514 yards and four touchdowns.

Like it was in week three, the key component of tonight’s game will be the line of scrimmage. With two big and burly lines going head to head, the team that wins the battle of the trenches will likely advance to the WPIAL semifinals.

The last time North Allegheny and Central Catholic met in the playoffs, the Tigers earned a 17-7 win over the Vikings in the 2010 WPIAL semifinals at Fox Chapel. Running back Alex Papson rushed for 190 yards and a game-clinching 67-yard touchdown late in the fourth quarter.

Tonight’s game will be held at North Hills’ Martorelli Stadium with kickoff slated for 7:30 pm. The game will be broadcast live via the internet on the North Allegheny Sports Network with the pregame show starting at 7:05 pm. Tune in for pregame conversations with Central Catholic head coach Terry Totten and North Allegheny head coach Art Walker. To listen to tonight’s broadcast, click here.