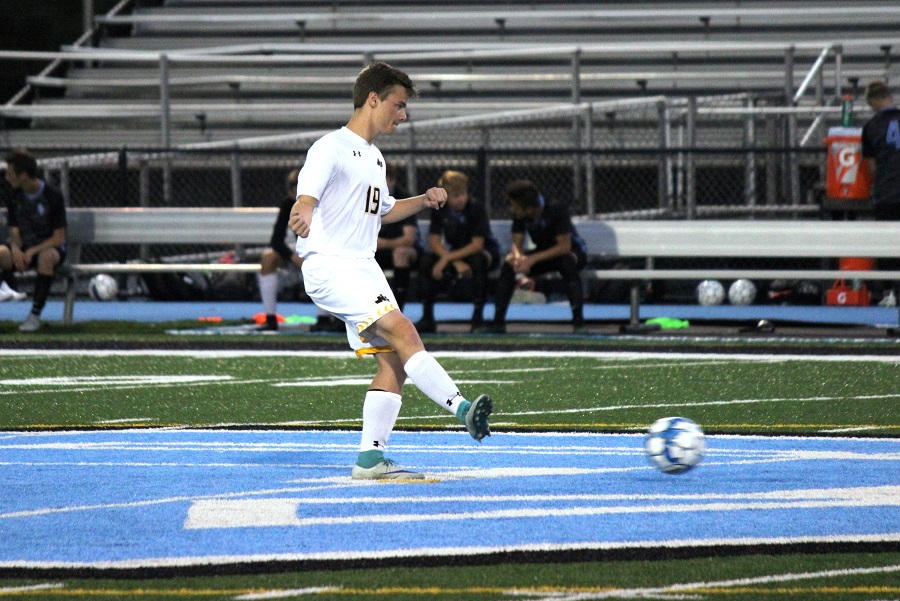 Tigers Lose First Of The Season At Butler, 3-1

North Allegheny Boys Soccer took their unblemished record through four games into Butler for a match against the second place Golden Tornado and it was clear from the start that Butler was motivated to change that streak.  Two goals and solid play from Butler senior forward Tate Mohney led the Golden Tornado to a 3-1 victory, bringing the Tigers streak to an end.

The scoring started early when Mohney received a long ball on the right-hand side, beating two NA defenders and dribbling through another to get a clean and uncontested shot against senior goalkeeper Devon Angermeier. That shot found the back of the net at the 37:45 of the first half for a 1-0 Butler lead.

Shortly after another Butler breakaway chance forced the need for a foul from senior defender Brennan Donovan at 34:03 and a yellow card was issued.  The direct free kick that immediately followed led to the second goal of the game for Butler after ping-ponging off two Butler attackers and into the net at 33:55. Adam Blose was credited with the goal, giving the Golden Tornado a 2-0 lead.

Pressure by the Tigers generated a great opportunity later in the half.  Junior midfielder Jack Walsh, earning his first start of the year, lofted a perfectly placed corner kick into the box that senior midfielder Kyle Kaczmarek headed towards the net only to see it bang off the crossbar and back.  For the balance of the half, the teams traded possessions with not many quality scoring chances throughout until 6:05.  Mohney was fouled in the box, awarded a penalty kick and found the back of the net raising the score to 3-0, Butler.

Shortly upon starting the second half it was evident the Golden Tornado were fine with just sitting back, kicking the long ball and working the clock.  Some fresh legs with an early substitution helped generate some early offensive chances for North Allegheny when juniors JD Runatz, Sam Passodelis, Matt Van Kirk and Justin Mericle entered the game.  The Tigers finally scored at 31:06 when a long, arching throw-in from senior defender Drew Hunker found Will Cinker, with his back to the net, forcing a half bicycle kick that went over the Butler goalie’s hands to cut the score to 3-1, Butler.

Chances were few the balance of the way as the Golden Tornado continued to work the clock and the Tigers struggled to maintain consistent possession for a comeback.  Butler staved off NA for a 3-1 victory.

North Allegheny falls to 4-1 overall and 3-1 in Section 1-AAAA. Butler leapfrogs NA into first place with a 3-0-1 section record. The Tigers resume action this Saturday at 1:00 p.m. at Fox Chapel.