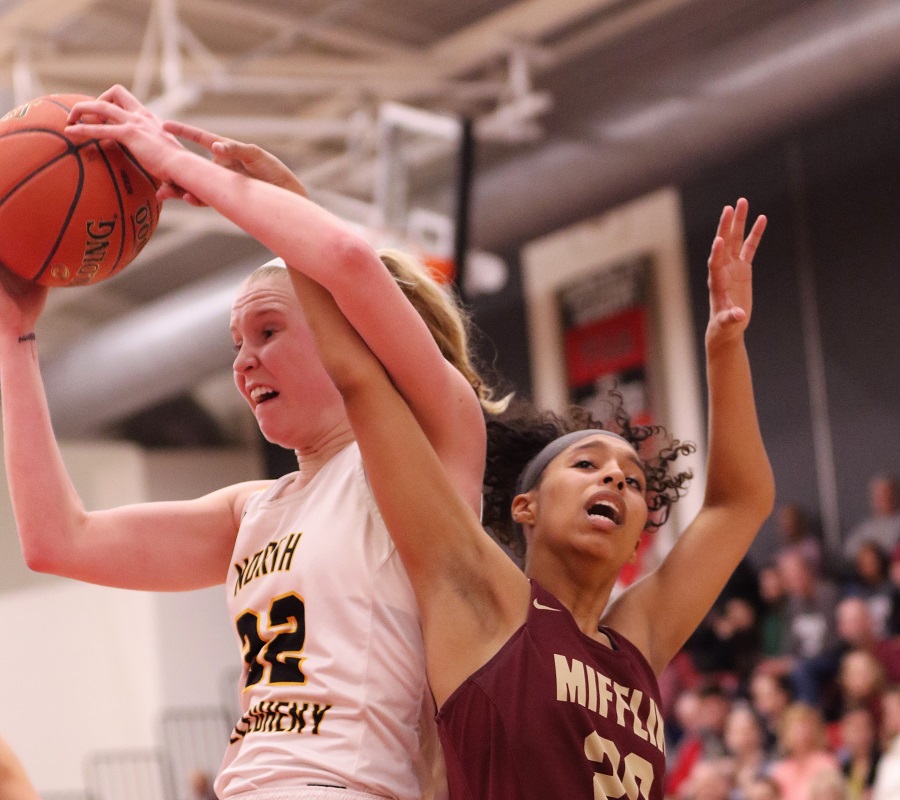 Appearing in the PIAA playoffs for the sixth consecutive season, the North Allegheny girls’ basketball team used a dominant effort on the glass to secure a 44-22 win over Governor Mifflin in the first round of the state playoffs on Friday night. The Tigers improve to 24-2 on the season, also marking the sixth straight year NA has won 24 or more games in a single season.

The No. 5 seed out of District 3 took the game’s early lead with a 5-0 run thanks to a 3-pointer by Elisa Fiore and a runner by Stelle Mollica. North Allegheny’s offense was cold to start the night and didn’t score until senior Brynn Serbin connected on a pair of free throws with 3:41 remaining in the quarter to bring the score to 5-2, Mustangs.

The Serbin free throws helped spark a 13-2 run that was spearheaded by sophomore Lizzy Groetsch, who scored 10 of her 12 points in the first half, including a pair of 3-pointers.  Groetsch was also paramount in NA’s efforts in the rebounding department and was named the Wright Automotive Player of the Game by the North Allegheny Sports Network.

North Allegheny, typically an outstanding 3-point shooting team, made only 6 of 34 attempts from beyond the arc. However, the Tigers ability to win the glass was the difference in the game. On offense, NA benefitted with numerous second and third chance opportunities. On defense, the Tigers limited Governor Mifflin to one-and-done possessions and hampered the Mustangs with their pressure defense.

North Allegheny held a 22-12 lead at halftime and pulled away in the second half on the strength of Serbin and senior Rachel Martindale. Serbin buried a pair of treys in the third quarter and finished with 11 points. Martindale netted 10 of her 14 points in the second half, doing the bulk of her damage at the free-throw line. The combination of Serbin and Martindale helped the Tigers cement a 44-22 win in the PIAA first round.

With the win, North Allegheny advances to the PIAA second round where it’ll face the reigning Class 6A state champions, Upper Dublin, on Tuesday night at a site and time to be determined. The game will be broadcast live via the internet on the North Allegheny Sports Network.

Governor Mifflin, who had won 10 of their last 11 coming into Friday’s game, ends the year with a record of 20-10.