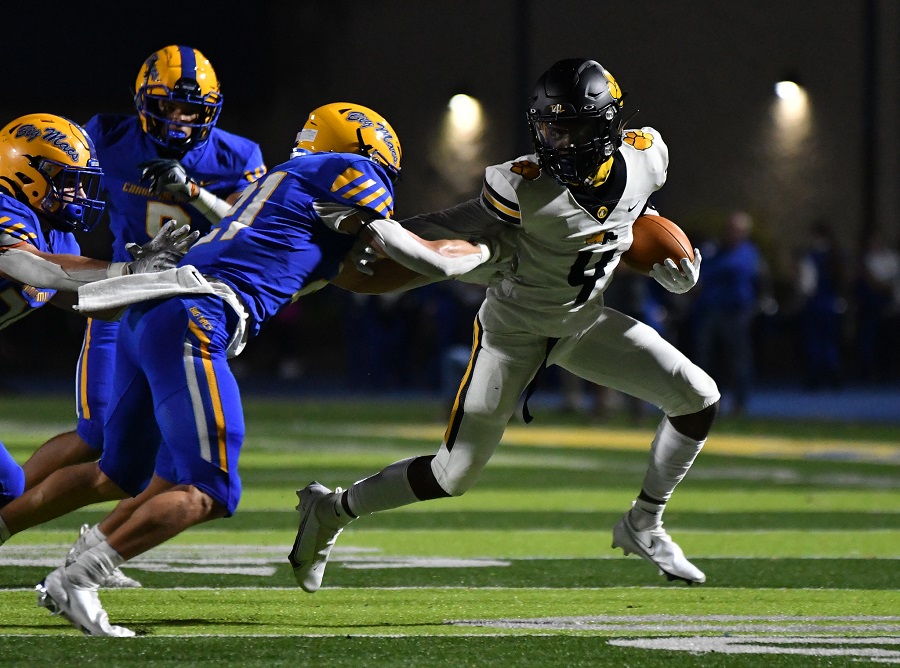 The North Allegheny Tigers (1-0) take to the road tonight for the Class 6A Tri-County Conference opener with the Canon-McMillan Big Macs (0-1). Tonight’s game is a rematch of last year’s WPIAL quarterfinal between the two teams, a contest the Tigers won, 49-26, on the strength of a career-best passing day from quarterback Logan Kushner. The NA signal caller threw for 260 yards and three touchdowns in the win. Since Canon-McMillan has made the jump to the largest classification in 2018, North Allegheny has won six in a row against the Big Macs, including two playoff victories.

Last week, North Allegheny posted a 41-0 drubbing of Allderdice in Week Zero. Already named an all-conference linebacker as a sophomore in 2021, junior Tyree Alualu made his debut at running back last week and carried the ball 12 times to the tune of 92 yards and two touchdowns. Alualu added a juggling touchdown catch in the second quarter to help key the blowout. Kushner was once again efficient, completing 11 of 17 passes for 167 yards and threw touchdowns. Junior receiver Khiryn Boyd hauled in seven of those passes for 105 yards. Along with Alualu, also reeling in TD passes were Nate Spak and Daniel Sellers. The NA defense limited Allerdice to just 78 yards of total offense and forced a pair of turnovers. The shutout was the first for the Tigers since a 35-0 whitewash of Canon-McMillan on Oct. 16, 2020.

Canon-McMillan is coming off a 35-28 loss to Penn-Trafford last week and gave the reigning Class 5A state champions all they could handle. Despite trailing 28-7 at intermission, the Big Macs fought back in the second half thanks to a 309 yard and four touchdown passing effort from junior quarterback Mikey Evans. Senior Austyn Winkleblech was the big play man with touchdown catches of 69 and 64 yards. Winkleblech, a Pitt recruit in baseball, finished the game with four receptions for 150 yards and three scores. Senior running back Jake Kasper takes over for Ryan Angott, who graduated, at tailback and rushed for 171 yards against the Warriors last week.

Other notable CM players that the Tigers will need to be aware of tonight will be offensive and defensive linemen Matt McMahon and Andrew Kocan. McMahon is the younger brother of senior linebacker Kent McMahon and Kocan is a Virginia Military Institute (VMI) commit. Both of the McMahon brothers were Big 56 Conference honorable mentions last season, along with junior linebacker Gene Calgaro and senior safety Austin Hillenbrand.

Kickoff for tonight’s game between North Allegheny and Canon-McMillan at AHN Stadium in Canonsburg is set for 7:00 p.m. The game will be broadcast live by the North Allegheny Sports Network with the pregame show getting underway at 6:40 p.m. Randy Gore and Andrew Heck will have the call. To listen to tonight’s game, click here.