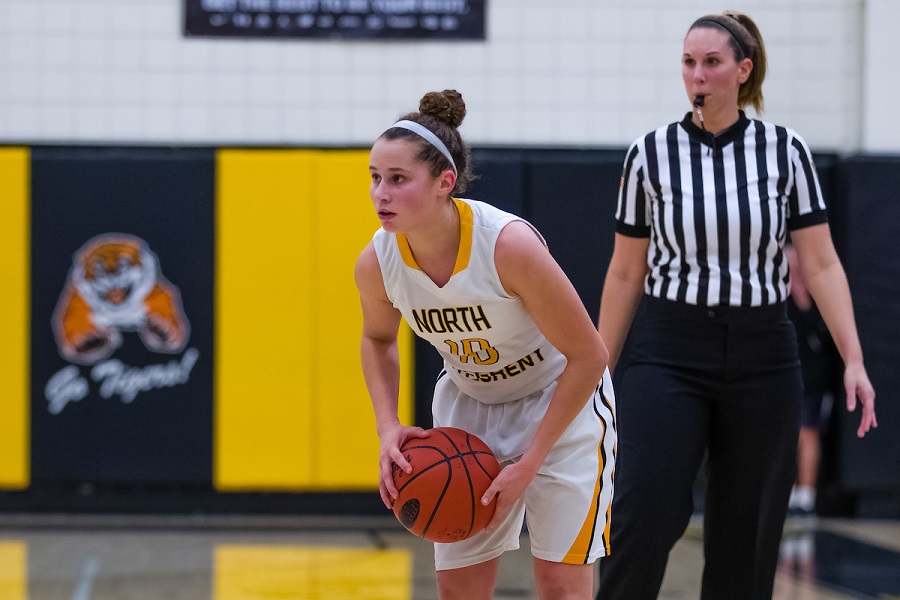 The North Allegheny girls’ basketball team defeated the Penn Hills Indians, 50-38, on Saturday afternoon, advancing to the PIAA semifinals for the third time in the last four seasons. The win was NA’s 17th in a row and 14th straight in the head-to-head series with Penn Hills. The Tigers will face Souderton in the state semifinals on Monday night.

In the PIAA quarterfinal meeting between North Allegheny and Penn Hills, both teams traded jabs in the opening minutes and the game was tied 7-7. The Tigers ended the first quarter on an 8-2 run to take a 15-9 lead heading into the second quarter. Despite a mini-spurt by the Indians that trimmed the score to 15-13, North Allegheny used a 9-0 run to take the largest lead in the first half, 24-13. Sophomore Rachel Martindale and senior Hailey Zeise helped lead the charge with eight and six points, respectively, in the half. The duo combined for four 3-pointers in the first 16 minutes of the game.

Penn Hills managed to trim the score to 24-16 by halftime and staged a comeback bid in the second half, cutting the NA advantage to 33-30 late in the third quarter. Senior Desiree Oliver, a Temple University recruit, was limited to just two points in the first half thanks to terrific defense from NA’s Brynn Serbin and Piper Morningstar. In the second half, Oliver heated up and posted 15 points to help pave the comeback trail.

However, the Indians could not gain any more ground on the Tigers who closed out the game by outscoring Penn Hills in the fourth quarter, 15-8, en route to a 50-38 triumph. Martindale finished with a team-high 16 points and four 3-pointers on her way to Wright Automotive Player of the Game honors. Zeise added 12 points and junior Madelyn Fischer chipped in with 10 points.

North Allegheny improves to 27-1 on the season, while Penn Hills’ campaign ends with a 23-4 record. Half of the Indians losses this season were to North Allegheny. The Tigers will take on Souderton from District 1 on Monday night at a site and time to be determined. The game will be broadcast live via the internet on the North Allegheny Sports Network.