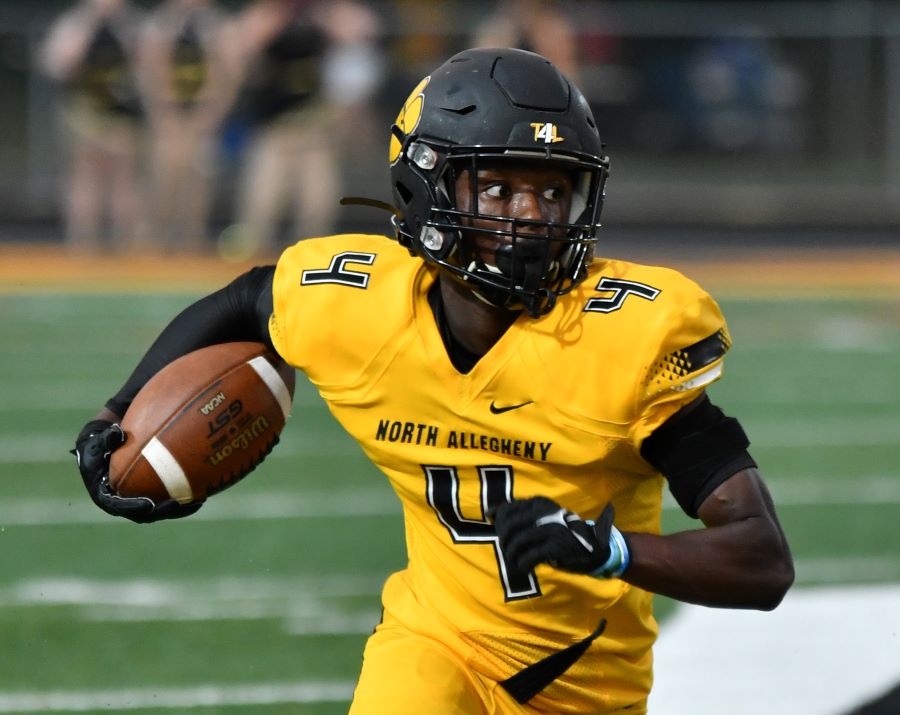 North Allegheny opened the 2022 season on Friday night with a 41-0 rout of Allderdice at Newman Stadium. Junior Tyree Alualu rushed for 92 yards, scored three total touchdowns and also forced a fumble on defense to earn Wright Automotive Player of the Game honors. Junior quarterback Logan Kushner piloted a precise offense with 11-of 17 passing for 167 yards and three touchdowns.

On the ensuing possession, Alualu stripped Allderdice quarterback Azerick Jetter of the football and sophomore Jack Yatchenko recovered the fumble at the Dragons 37-yard line.

After back-to-back sacks by the Allderdice defense, it appeared NA might not capitalize on the turnover. However, on a 3rd and 26, Kushner heaved a 50-yard pass to Boyd for a first down at the Dragons 6-yard line. Boyd finished the night with seven receptions for 105 yards. Moments after the bomb to Boys, Alualu rushed into the end zone on a 6-yard scoring jaunt for a 14-0 lead with 5:31 to play in the first quarter.

Alualu scored one more time before the end of the quarter on a 6-yard pass from Kushner to balloon the Tigers lead to 21-0 with 20 seconds remaining in the period.

North Allegheny stretched the lead to 28-0 with 4:25 left in the second quarter when Kushner hit junior Nate Spak for a 10-yard touchdown pass.

With the Tigers in command coming out of the locker room at halftime, NA wasted little time invoking the mercy rule on another scoring strike from Kushner. The NA signal caller delivered a 35-yard touchdown pass to junior tight end Daniel Sellers midway through the third quarter for a 35-0 lead.

The Tigers tacked on more touchdown with 7:47 left in the fourth period when sophomore Liam Flaherty plunged into the end zone on a 1-yard run to bring the final score to 41-0.

On the night, North Allegheny outgained Allderdice, 303-78. The NA defense took the fire out of the Dragons attack with three sacks and two turnovers. Along with the Yatchenko fumble recovery, senior Campbell Melzer made a diving interception in the second quarter.

Following the season opening win, North Allegheny will visit the Canon-McMillan Big Macs next week in the Tri-County Five Conference opener. Kickoff is set for 7:00 p.m.