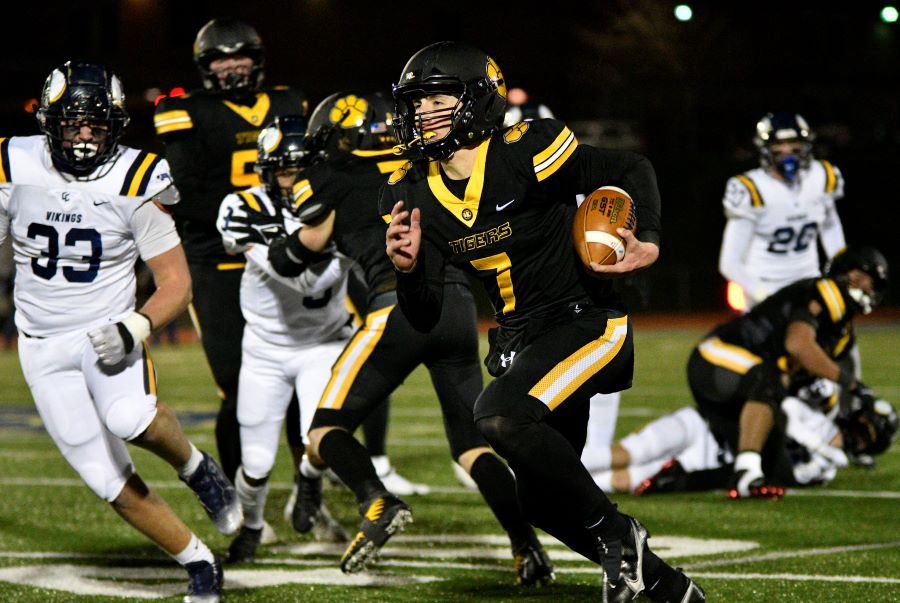 The North Allegheny Tigers won their fifth WPIAL crown and first since 2012 with a 35-21 victory over the Central Catholic Vikings in the WPIAL Class 6A championship game on Saturday night at Norwin High School. Junior quarterback Logan Kushner accounted for three total touchdowns and came through for the best rushing performance of his career with a 195-yard effort on 16 carries. It was the most rushing yards in a game by a Tiger quarterback since Ethan Maenza rushed for 219 yards against Mt. Lebanon on Sept. 30, 2016.

Back in week four, North Allegheny outslugged Central Catholic in a defensive struggle, 7-3. A similar start was witnessed in the first quarter of the WPIAL title game as offensive miscue led to the first score of the game. With 3:43 left in the first quarter, a failed RPO and fumble by Central Catholic quarterback Peyton Wehner bounced into the arms of North Allegheny’s Daniel Sellers and the junior defensive end rumbled 15 yards into the end zone for a 7-0 lead. 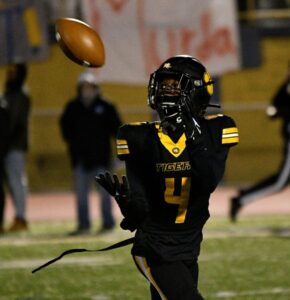 Khiryn Boyd hauls in a 51-yard touchdown pass in the first quarter.

Following a three-and-out by the Vikings on their next possession, the Tigers extended the lead when Kushner lofted a 51-yard scoring aerial to junior wideout Khiryn Boyd with 1:02 to play in the second quarter for a 13-0 lead. The extra point kick was blocked.

While Central Catholic was stuck in neutral in the first period, the Vikings finally hit their gear in the second quarter and answered the Tigers score with a nine-play, 78-yard drive that culminated on a 16-yard touchdown run by Vernon Settles to trim NA’s lead to 13-7 with 8:56 left in the second quarter.

A 54-yard run by Kushner on North Allegheny’s next drive perched the Tigers on the Central Catholic 21-yard line with a chance to extend the lead. However, Settles intercepted a Kushner pass and returned it 19 yards to the Central Catholic 36-yard line. The Vikings turned the turnover into points as Settles hauled in a 19-yard touchdown pass from Wehner with 4:21 left in the second quarter to grab a 14-13 lead.

Central Catholic’s one-point advantage was short-lived, however, as just over a minute later Kushner dialed up Boyd for another long touchdown pass, this time from 68 yards out, to vault NA back in front for a 19-14 lead. Kushner followed with a two-point conversion run to give the Tigers a 21-14 advantage with 3:16 to go before halftime.

In a seesaw second period, the Vikings put together a nine-play, 82-yard march that was punctuated on a 2-yard touchdown run by Wehner, tying the score at 21-21 with 24 seconds remaining prior to intermission.

In the second half, the 2022 success formula returned to form as North Allegheny took control of the line of scrimmage on both sides of the ball. With 5:44 left in third quarter, the offense asserted its control with a six-play, 80-yard march to garner a 28-21 lead. The Tigers ran the ball on all six plays of the drive and capped the possession thanks to a 45-yard scoring scamper by Kushner.

After a three-and-out by the Vikings, it appeared the Tigers might extend the lead with another ball-control drive deep into PCC territory. However, the drive stalled at the PCC 4-yard line and NA settled for a 21-yard field goal attempt that was blocked by Elijah Faulkner with 3:38 left in the third period. Despite the sudden change, the Vikings once again went three-and-out and punter Peter Gonzalez shanked a 9-yard punt that gave NA possession at the PCC 25-yard line. The Tigers wasted little time capitalizing on the field position and two plays later senior running back Andrew Gavlik powered his way through three different tackle attempts for 19-yard touchdown run. The scoring run was Gavlik’s fifth of the season and gave North Allegheny a 35-21 lead with 11:52 remaining in the game.

In desperate need of a score, Central Catholic put together an eight-play drive for 63 yards, but the march stalled out at the NA 15-yard line and a fourth down incompletion by Wehner gave the Tigers the ball back with 10:22 left in the game. 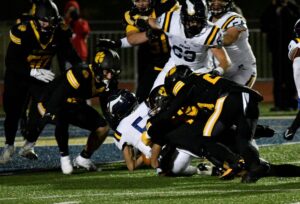 The NA defense stuffs Peyton Wehner on 4th down for a critical goal-line stand.

North Allegheny was forced to punt on its next possession, giving the Vikings another chance to close the gap. Beginning the drive at the NA 42-yard line with 5:18 left in the game, Wehner connected with freshman Colsen Gatten for a 36-yard pass to the Tigers 2-yard line. Following a holding penalty, Wehner tossed a 10-yard pass to Gonzalez to set up PCC for a 2nd and goal at the NA 2-yard line. On the next play, Wehner was leveled on a punishing hit by junior linebacker Tyree Alualu at the 1-yard line, forcing a critical 4th and goal. On the drive’s last play, Wehner tried to run left but was dropped for no gain by Sellers with just 2:59 remaining in the contest and the NA defense drove the final nail in the Central Catholic coffin.

As they did in the waning minutes of their win over PCC on Sept. 23, Gavlik and the NA rushing attack ate up the remaining time off the clock to close out a 35-21 victory. After rushing for just 18 yards in the first three quarters, Gavlik finished the night strong with 64 yards on 18 carries.

Along with Kushner’s 195 yards rushing, the junior quarterback totaled 130 yards on just three pass completions. Two of his three completions went for touchdowns, both to Boyd, who finished with 119 yards receiving. For his efforts, Kushner was named the Wright Automotive Player of the Game.

With the win, North Allegheny improves to 11-1 on the season and advances to the PIAA playoffs to face District 6 champion State College next weekend. Central Catholic’s season comes to an end with a 7-5 record.