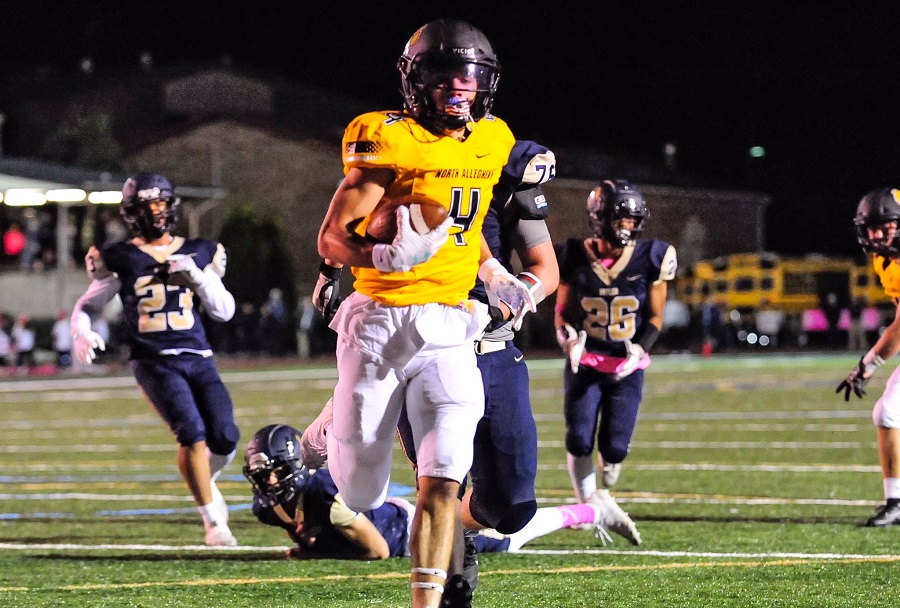 The North Allegheny defense picked off four Butler passes while the offense was efficient and effective in a 49-14 victory over Butler Friday night in Quad County Conference action.

The scoring started early for the Tigers. After the defense forced a three and out on Butler’s opening possession, Luke Colella took the ensuing punt back 52 yards for the first score of the night and North Allegheny led 7-0. After another three and out for Butler, it only took the NA offense one play to get into the end zone. Senior Sam Sheridan took a jet sweep 59 yards to the end zone, making the game 14-0, Tigers. With two minutes remaining in the quarter, it was Colella getting in on the act again, scoring from five yards out to make the game 21-0, NA. Colella then made a huge play on defense, picking off Butler quarterback Cooper Baxter on the first play after the score. The very next play, senior Percise Colon took the ball 24 yards to the house and the Tigers had a 28-0 lead.

With Butler driving in the second quarter, Colella was able to once again pick off Baxter with a one-handed, diving interception at North Allegheny’s 3-yard line. The Tigers offense then took the ball 97 yards, capping the drive off with a 15 yard connection between Ben Petschke and Sheridan making the game 35-0. Right before the half, Ben Rohan picked off Baxter and went 34 yards to the end zone, extending the Tigers lead to 42-0. Before halftime, Butler got on the scoreboard when Baxter broke loose for a 75-yard touchdown run to trim the NA lead to 42-7 at intermission.

In the third quarter, J.R. Burton picked up an 8-yard touchdown run to improve the Tigers lead to 49-7. In the fourth quarter, Adam Gould stopped a Butler drive with an interception of quarterback Dylan Fediaczko. Fediaczko managed to get into the end zone for Butler with under a minute to go in the game and North Allegheny came out with a 49-14 victory.

Colella was the Wright Automotive Player of the Game with a punt return for a touchdown, a rushing score and two interceptions.

The win improves the Tigers record to 7-0, 6-0 in section play. Butler falls to 0-7 and 0-5 in the section. The Tigers return home next Friday for homecoming to take on Hempfield. That game will be broadcast right here on the North Allegheny Sports Network.