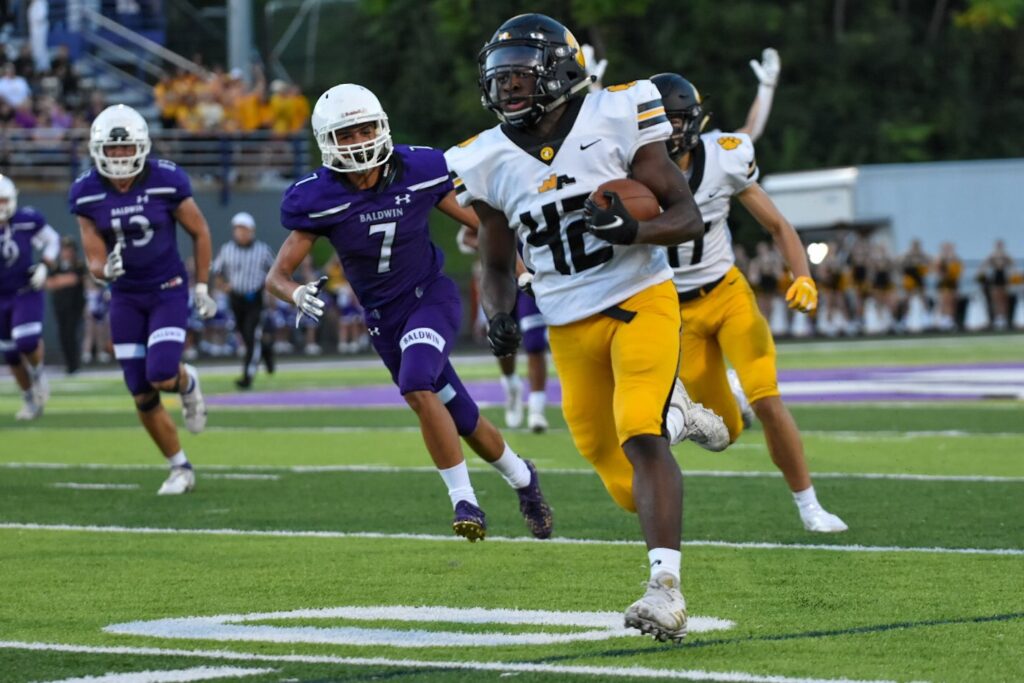 Tigers Run Away From Fighting Highlanders, 61-14

In the Class 6A Quad County Conference opener on Friday night, the North Allegheny Tigers ran away from the Baldwin Fighting Highlanders for a 61-14 blowout victory. The 61 points is the most for the Tigers since scoring 62 points in a 62-35 win over Hempfield on Oct. 11, 2019.

The Tigers piled up the yardage, outgaining the Highlanders, 472-147. Sophomore quarterback Logan Kushner was 5-for-7 passing for 82 yards and tossed three touchdowns. Two of Kushner’s scoring strikes went to senior wideout Kyrell Hutcherson and a third was hauled in by senior receiver Cole Dorn. Kushner added 29 rushing yards and was named the Wright Automotive Player of the Game by the North Allegheny Sports Network.

Facing Baldwin for the first time since a 40-0 postseason victory over the Highlanders in the first round of the 1998 playoffs, the Tigers once again controlled the game from wire to wire. In the first quarter, North Allegheny scored three touchdowns to grab a 21-0 lead. Senior quarterback Tanner Potts scored on a 14-yard run, senior running back J.R. Burton scampered into the end zone on a 40-yard jaunt and Kushner hit Hutcherson on a middle screen for 32 yards and a score in the opening stanza.

It was more of the same in the second quarter as Kushner connected with Hutcherson for a fantastic 18-yard touchdown grab early in the period for a 28-0 lead. Junior Andrew Gavlik scored on a 3-yard run midway through the quarter and Dorn reeled in a 10-yard scoring pass from Kushner to bring the score to 42-0, Tigers, at intermission.

Junior quarterback Andrew Hart stole the show in the third quarter, amassing 109 yards rushing on just six totes and started the scoring in the second half with a 53-yard race to the end zone and the NA lead swelled to 49-0. A 64-yard run by Hart later in the third set up a 2-yard touchdown run by Evan Lyon for a 55-0 advantage and Aiden Buggey muscled his way into the end zone on a 13-yard run to increase the NA lead to 61-0 with 38 seconds to play in the third period.

Baldwin cracked the scoreboard on a 92-yard kickoff return for touchdown by Devonte Jones and rounded out the scoring with an 8-yard run by Biji Moses to bring the final score to 61-14, North Allegheny.

With the win, North Allegheny improves to 3-1 overall and 1-0 in conference play. Baldwin slips to 0-4 overall and 0-1 in the Quad County Conference. The Tigers will host the reigning Class 6A champion Central Catholic Vikings next week at Newman Stadium.