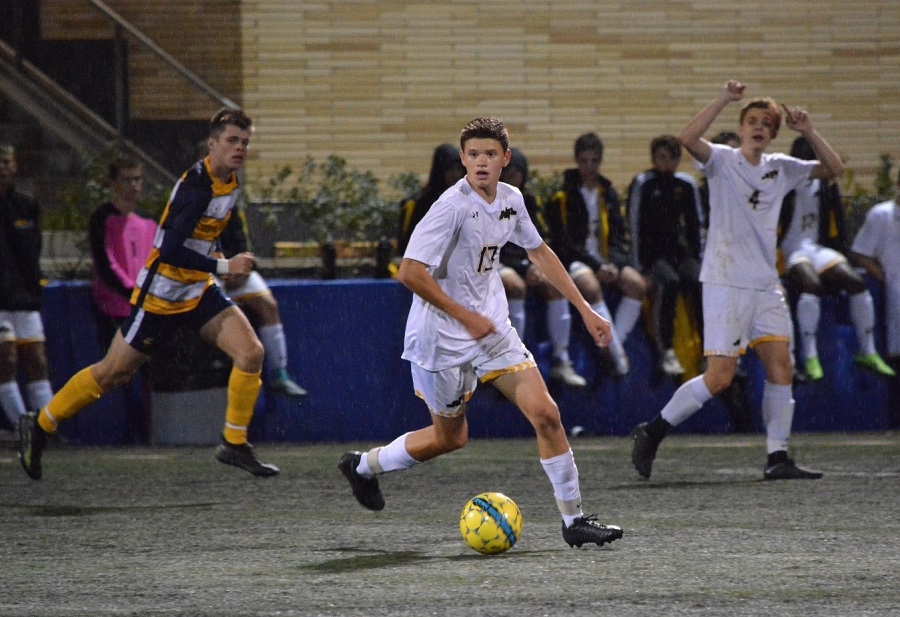 On another rain filled night, the North Allegheny Boys Soccer team scored two goals within the first 10 minutes of play and never looked back in beating section foe Central Catholic, 4-1. Three Tigers found the back of the net, each for their first goals of the season.

At 33:00 of the first half, junior forward Sam Passodelis launched a corner kick into the box that found senior midfielder Nick Bridges deep out front of the goal crease.  Bridges got a clean header directed toward the goal mouth that senior defender Niko Hindsbo was able knock in with a second header clean past the goalie for the Tigers first goal.  A short 80 seconds later, senior forward Sam Wilson got a clean strike toward the net that deflected off a Viking defender and past the goalie, giving the Tigers a quick 2-0 lead.  At 24:30, Central Catholic recorded their first shot on goal when a direct free kick was headed toward an open net that senior goalie Devon Angermeier quickly repositioned to make a great save.

The Vikings came out with a renewed purpose and intensity during the first 10 minutes of the second half, which led to their only goal of the game at 32:20 on a well-placed direct free kick by senior captain Thomas Brook.  However, that would be the only goal this staunch Tiger defense would surrender on the night.  The Tigers received insurance goals late in the game, both scored by junior defender Jason Roman. Roman’s first goal came on a clean volley at 16:30 and the second was on a flying deflection of a perfect corner kick served up by Bridges.

The victory drives the Tigers record to 7-3 in the section, 8-3 overall.  The Tigers led in shots on goal, 10-4, and overall possession time by six minutes, while the Vikings led in fouls, 12-6, and yellow cards, 3-0. North Allegheny hosts Tigerfest and “Pack-the-Pitch” this Saturday, 7:00 p.m., vs. non-section opponent, Penn-Trafford.