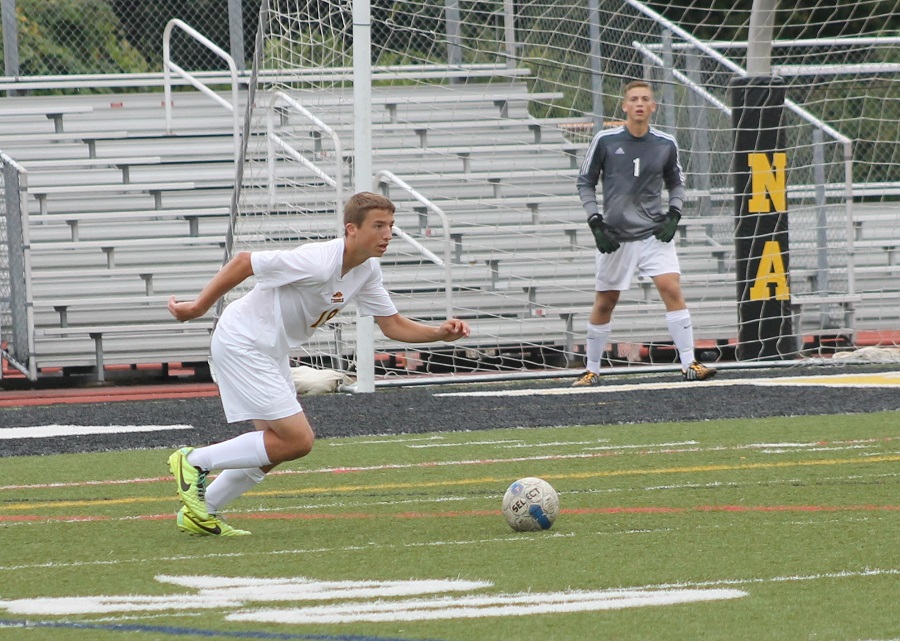 The last time North Allegheny faced the Pine-Richland Rams at Newman Stadium, the game needed overtime before a winner could be decided. On Tuesday night, it again took overtime in this Section 2-AAA clash, but this time the Tigers and Rams concluded the evening in a 0-0 deadlock.

Entering Tuesday night’s contest, the Rams had won 8 of the last 10 meetings with the Tigers, including a stunning 2-1 overtime win at Newman Stadium last year. Pine-Richland seemed poised for a similar result, owning time of possession in the early moments of the first half.  While time of possession was with the Rams for the first 15 minutes of the game, the scoring chances for PR were few and far between thanks to a North Allegheny defense that suffocated any potential threats.

The Rams outshot the Tigers 5-4, but defensemen like Spencer Haesting, Dillon Thoma, and Nick Thornton prevented PR from any ideal scoring looks as goalie Luke Nolan pitched his third straight shutout.   The game was also the fourth straight in which the Rams’ offense went without a goal.

As the game wore on, North Allegheny began to assert itself offensively behind the footwork of junior forward Michael Peters.  Along with senior Bobby Upton, Peters came close to giving the Tigers the lead late in the first half.  Peters was denied on a great defense play by PR sophomore Jake Engel, and Upton rang a shot off the right post as the teams went to intermission, scoreless.

The Tigers pressure became even more prevalent in the second half and overtime periods, but the Rams and senior goalie Nick Stasko managed to survive the continued NA threats for a 0-0 stalemate. The Tigers persistence helped them own the edge in corner kicks, 8-2.

In a defensive grudge match, the North Allegheny Sports Network chose defenseman Nick Thornton as the Wright Automotive Player of the Game. Thornton was a stalwart on the back end and also provided NA with a couple of header scoring chances in the second overtime period.

The tie keeps North Allegheny at .500 overall with a 3-3-1 record and puts the Tigers at 2-1-1 in Section 2-AAA. Pine-Richland sits at 1-7-1 overall and 0-4-1 in section play.  NA returns to action on Thursday night with a road contest against the Shaler Titans.  Kickoff is slated for 7:30 pm.