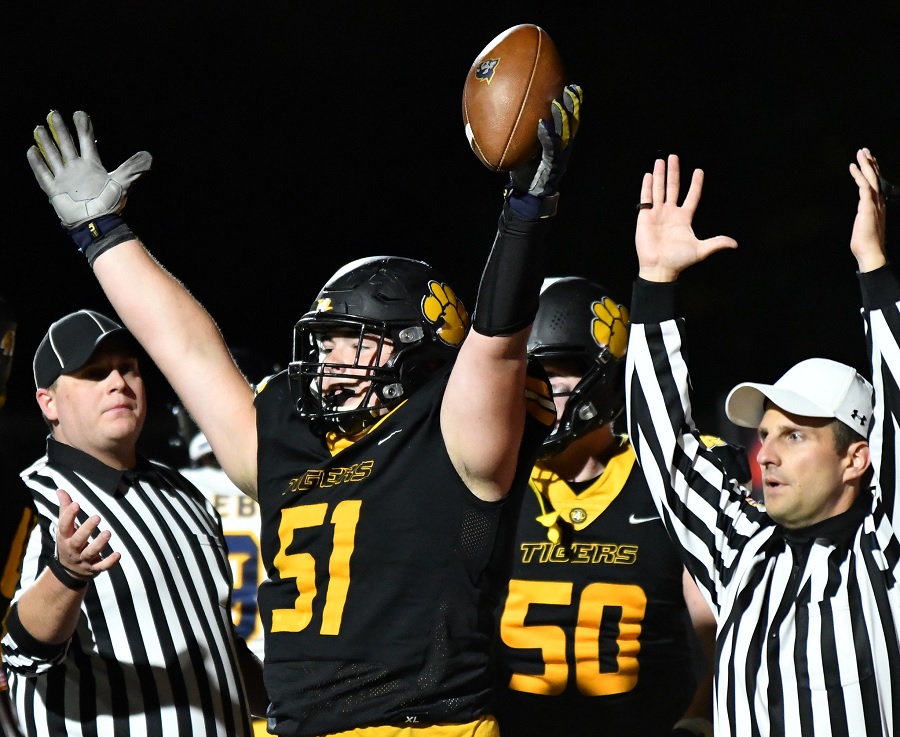 The North Allegheny Tigers clinched a playoff spot on Friday night with a 20-6 homecoming win over the Mt. Lebanon Blue Devils at Newman Stadium. The NA defense permitted a paltry 94 yards of offense, forced three turnovers and scored a touchdown of its own to secure an important win in the Tri-County Five Conference.

The most impressive offense drive of the night came on North Allegheny’s opening possession as the Tigers marched 75-yards on seven plays for the game’s first touchdown. The drive was sparked on a 3rd and 14 from the NA 44-yard line thanks to a 42-yard run by quarterback Logan Kushner. The Tigers’ signal caller punctuated the possession with a 1-yard QB sneak with 9:10 on the first quarter clock for a 7-0 lead. Finishing with 82 yards passing and 14 more rushing yards, Kushner was named the Wright Automotive Player of the Game.

From there, the game became a defensive struggle with neither team gaining much ground. NA received the next big break of the game in the second quarter when Mt. Lebanon’s Ezra Heidenreich muffed a punt, which was recovered by junior Tyree Alualu at the Mt. Lebanon 10-yard line. One play later, junior Khiryn Boyd scored on a 10-yard touchdown run with 5:17 left in the half for a 14-0 lead.

Later in the half, it was a North Allegheny punt that went awry late, giving Mt. Lebanon possession at the NA 40-yard line. Two plays later, senior Alex Gevaudan tossed a 31-yard scoring pass to Mike Beiersdorf with 1:48 remaining in the second quarter, cutting the Tigers advantage to 14-6. The extra point kick by Beiersdorf was blocked.

The North Allegheny defense dominated the remainder of the game and limited the Blue Devils to negative 2-yards of total offense in the second half. Nick Berarducci recovered another muffed punt by the Blue Devils in the third quarter and junior Evan Lyon intercepted a pass with 8:00 remaining in the fourth quarter. Unfortunately, neither turnover yielded points for the Tigers and the scored remained 14-6 until the waning minutes of the game. After a Rourke Kennedy punt pinned Mt. Lebanon inside the 20, the Blue Devils faced a 4th and 20 from the ML 2-yard line. On the desperation play, Alualu sacked Gevaudan in the end zone and sophomore Jack Yatchenko recovered the ball for a touchdown and a 20-6 lead with 1:20 remaining in the game. The two-point conversion attempt following the touchdown failed.

Alualu finished with a team-high 10 tackles, while linebackers Nate Spak and Kevin O’Donnell each finished with eight stops. On offense, senior running back Andrew Gavlik led with 61 yards on 15 carries.

The Yatchenko touchdown proved to be the dagger and NA closed out a 20-6 victory to remain undefeated in conference play with a 3-0 mark. The Tigers improved to 6-1 overall, while Mt. Lebanon falls to 2-5 overall and 1-3 in the conference. North Allegheny will visit Norwin next week in a non-conference contest.