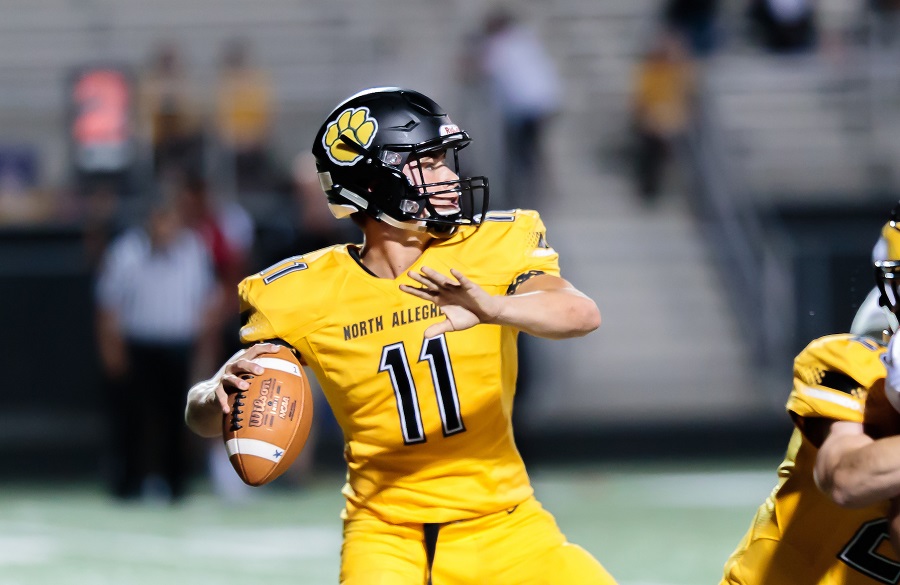 Amid a downpour at Mt. Lebanon High School, the No. 2 North Allegheny Tigers outlasted a two-hour lightning delay and the host Blue Devils for a convincing 34-3 conference win on Friday night. Facing the leading passer in Class 6A, the Tigers defense limited Mt. Lebanon quarterback Seth Morgan to 14 of 28 passing for 140 yards and an interception.

With the Blue Devils high-flying passing game grounded, the North Allegheny rushing attack seized control as senior Ben Maenza and junior Percise Colon both hydroplaned their way to 100-yard rushing performances. The duo combined for four touchdowns, three of which by Colon, who was named the Wright Automotive Player of the Game by the North Allegheny Sports Network.

The Tigers set the tone on the opening drive of the game, a 60-yard march that culminated on 42-yard rumble to the end zone by fullback Alfonso Cantu for a 7-0 lead 1:28 into the first quarter.

The early advantage for NA proved pivotal as sheets of rain began to fall in the second quarter which turned the game into a slugfest that favored the Tigers. Just before halftime, North Allegheny improved the lead to 14-0 on a 1-yard rushing score by Colon with 44 seconds left in the second quarter.

With both teams lined up for the second half kickoff, a lightning delay halted the action for two hours before play resumed. To open the third quarter, the Blue Devils had the ball first and used an 8-play, 46-yard drive to produce their first and only points of the night, a 39-yard field goal by Casey Sorsdal to trim NA’s lead to 14-3 with 9:53 on the clock.

The lightning delay, and the Sorsdal field goal, only postponed the inevitable as the Tigers scored 20-unanswered points to put the game away. Faced with a 4th and 8 from the Mt. Lebanon 32-yard line, junior quarterback Ben Petschke tossed a screen pass to Colon who not only picked up the first down but raced all the way to the end zone for a 21-3 lead with 3:39 remaining in the third quarter.

Following a three-and-out by Mt. Lebanon, North Allegheny scored three plays later on a 62-yard touchdown run by Maenza for a 28-3 advantage with 1:49 to play in the third quarter. Maenza totaled a team-high 133 yards on 11 carries, surpassing the century mark for the fourth time in a game this season.

With 10:59 left in the fourth quarter, Colon put the finishing touches on the victory with an 82-yard touchdown scamper to bring the score to its ultimate final, 34-3. Colon ended the evening with 147 total yards, 115 on the ground, and three total touchdowns.

The North Allegheny defense was impressive and forced three turnovers, including an interception by Corey Melzer for his team-leading third of the season. Junior Amosis Porter and sophomore Elias Bishop each recovered a fumble. Junior Luke Colella paced the team in tackles with 11 stops on the night.

With the win, North Allegheny leaps to 5-0 overall and 4-0 in Class 6A. Mt. Lebanon slides to 2-3 overall and 2-2 in conference play. The Tigers return home for a week five date with the Seneca Valley Raiders next week.