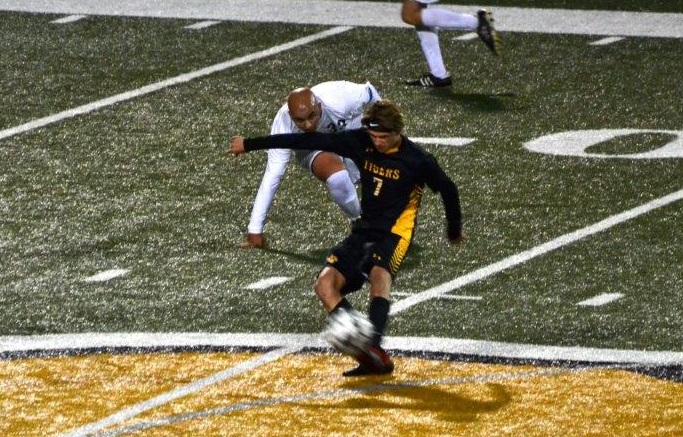 In the regular season finale, and senior night at Newman Stadium, the North Allegheny boys’ soccer team clinched a playoff berth with a 1-1 tie against the Butler Golden Tornado. By virtue of Monday’s tie, Butler also qualifies for the postseason and finishes in third place in Section 1-AAAA with an 8-4-2 mark. North Allegheny and Fox Chapel conclude the section schedule in a tie for fourth place with an 8-5-1 section record. Because of a season split between the Tigers and Foxes, both teams qualify for postseason play.

With a playoff berth at stake, the contest between NA and Butler was an intense battle from start to finish. The Golden Tornado scored the game’s first goal following a corner kick that was administered by senior Tate Mohney from the right corner. The North Allegheny defense drove the ball right back to Mohney, who lofted a high-arching ball in front that was headed twice, the second of which was directed into the net by Adam Blose for a 1-0 Butler lead with 11:40 to play in the half.

The Tigers returned the favor just under five minutes later on a corner kick that was deflected into the Golden Tornado goal by senior Nick Bridges to even the score at 1-1. The goal was Bridges’ third of the season. For his efforts, Bridges was named the Wright Automotive Player of the Game by the North Allegheny Sports Network.

The tie score remained intact through the second half thanks in large part to a North Allegheny defense that was able to stave off Mohney, an all-state forward from a season ago. The Tigers back line of Nikolaj Hindsbo, Austin Smith, Brennan Donovan, Jason Roman, Drew Hunker and Samuel Giannetti combined to thwart the Golden Tornado’s top striker.

In net, Grant Baierl got the start on senior night and performed admirably in the first half. In the second half, fellow senior Devon Angermeier kept Butler off the board and helped NA narrowly avert an own-goal disaster with 3:30 left in the game. With the NA defense attempting to play the ball back toward Angermeier, an errant kick sent the ball trickling toward the Tigers goal. Alertly, Angermeier raced back to the goal line and made a sprawling save to keep the game deadlocked at 1-1.

In overtime, neither team could find a game-winning tally as the night ended in a 1-1 draw.

Overall, North Allegheny sits at 10-5-1 on the season. Butler moves to 10-4-2. Both teams will prepare for the upcoming WPIAL playoffs. The playoff pairings are slated to be announced on Wednesday.