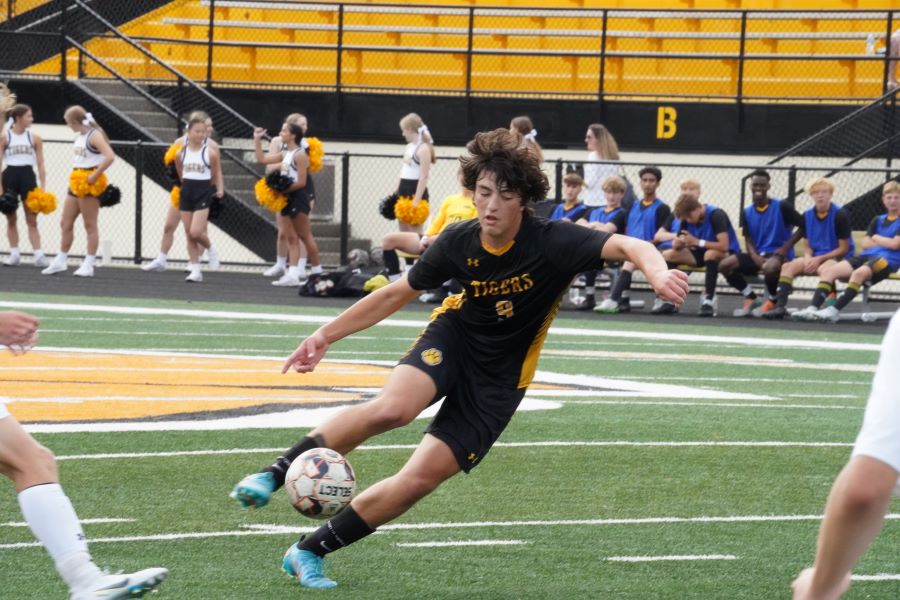 The North Allegheny Boys Soccer program notched its 15th consecutive win in the head-to-head series against Hampton on Saturday at Newman Stadium, topping the Talbots 2-1.

The first half started fast for the Tigers, who took advantage of an early corner kick to score the first goal of the game. Gabi Götz lofted the kick from the near corner finding fellow senior Aidan Dyga, who headed the ball past the keeper. NA almost scored again about 10 minutes later, but a Hampton slide tackle on the goal line saved a Luke Brady chance on the doorstep. The Tigers added to their lead with less than five minutes left in the first half. Junior Arnav Patel hit senior Adam Henning with a beautiful lead pass ahead of the Hampton back line, leaving Henning alone with the goalie. He cashed in for his first of the season after faking out the keeper and NA’s lead grew to 2-0. The Talbots had a chance to cut the lead in half with 45 seconds left in the frame, but junior goalkeeper Dante Accamando stopped a point-blank shot from Coleman Docherty with a diving toe save.

Five minutes into the second half, senior Ben Christian had an opportunity within just a few yards of the goalmouth, but the shot hit the right post.  Ten minutes later Hampton tightened the score when senior forward Sam Campbell tipped in a pass from the far sideline, cutting the NA lead to 2-1. Accamando and the Tiger defense were able to hold on for the win through the rest of the game.

Henning was named the Wright Automotive Player of the Game for his goal, which ended up becoming the game-winner.

The Tigers improve to 5-1-1 on the season and will be back in action Tuesday night with a home game against Fox Chapel at Newman Stadium. You can listen to that game on the North Allegheny Sports Network.