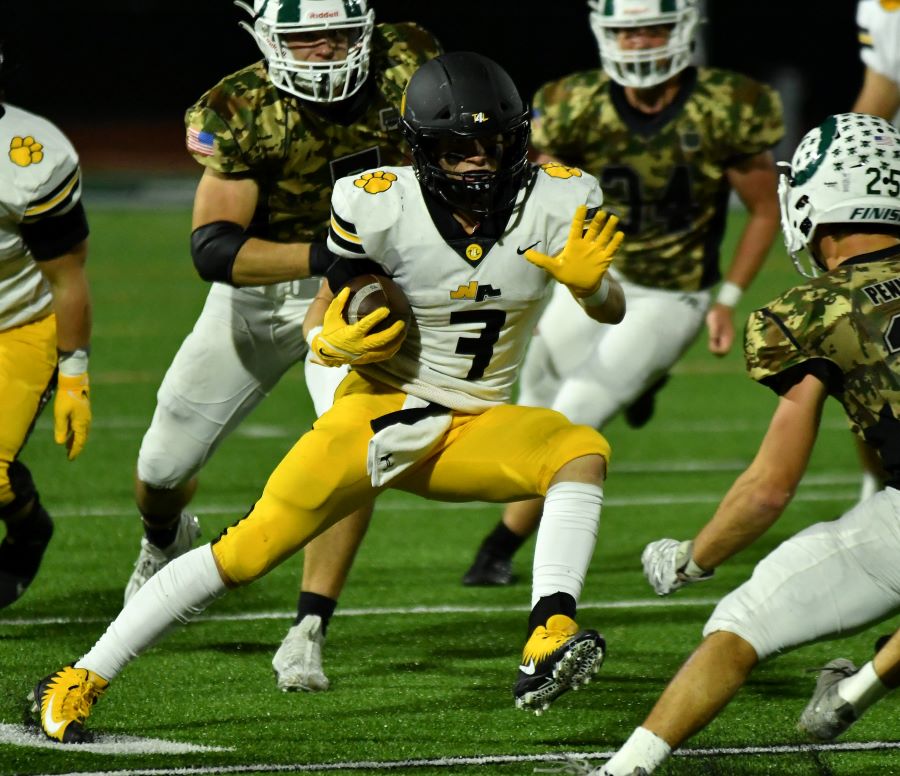 Tigers tripped up by Rams in Rivalry Renewal

It was a first quarter mostly dominated by Pine-Richland but North Allegheny’s defense was able to hold strong as they played the entire first quarter on their side of the field. A missed field goal kept the game scoreless but on their second drive and six seconds into the second quarter, the Rams dominating field position finally paid off when Ryan Palmeri ran it in from 12 yards out and the Rams took the 7-0 lead. On the ensuing  drive, North Allegheny’s offense looked like it had stalled once again but on 4th and 15 from their own 14, the Tigers rolled the dice and ran a fake punt and punter Rourke Kennedy picked up exactly 15 yards and the drive continued. With this play, momentum shifted in the Tigers favor and they drove the ball all the way down the field, and Logan Kushner found Daniel Sellers for a 16 yard touchdown pass, and it was all tied 7-7. After forcing the Rams to punt, the Tigers drove once again but were stopped just outside the redzone on 4th and 5. With under two minutes to play, the Rams put together a 5-play, 77 yard drive that only took 1:23 and took the 14-7 lead that they would have at halftime.

The third quarter started out all Tigers, after forcing a Pine-Richland 3-and-out, North Allegheny’s Andrew Gavlik got going picking up 34 of the 54 yards on the drive, which finished with Kushner finding Anthony Varlotta in the middle of the field for a 18 yard touchdown and we were tied again 14-14. With the momentum on North Allegheny’s side and Pine-Richland facing a 4th and 3, it was their turn to flip the script and run a fake punt that gained 39 yards and a new set of downs. The Rams would finish the drive with Palmeri finding Bradford Gelly for a 15 yard touchdown and the Rams were back in front 21-14 with 11:06 left in the game. North Allegheny’s offense responded with a 13-play, 68-yard drive but had to settle for three points when Nick Van Winkle hit a 28 yard field goal to cut the Tiger deficit to 21-17. The Rams responded with a 70-yard drive, all 70 yards rushed by Palmeri and put the game away winning 28-17.

Kushner finished 10 of 18 with 89 yards and two touchdowns. Gavlik led the team in rushing with 76 yards and Varlotta had three catches for 56 yards and a touchdown.

For his efforts, Tyree Alualu was named the Wright Automotive Player of the Game racking up 12 tackles, 1.5 for loss. Kevin O’Donnell had 10 tackles and Evan Lyon had eight tackles.

North Allegheny falls to 5-1 overall. Pine-Richland improves to 3-3 overall. The Tigers return home and to conference action next week when they take on the defending 6A WPIAL and state champion Mt. Lebanon Blue Devils on Friday at 7:30 p.m. A game that will be live on the North Allegheny Sports Network.