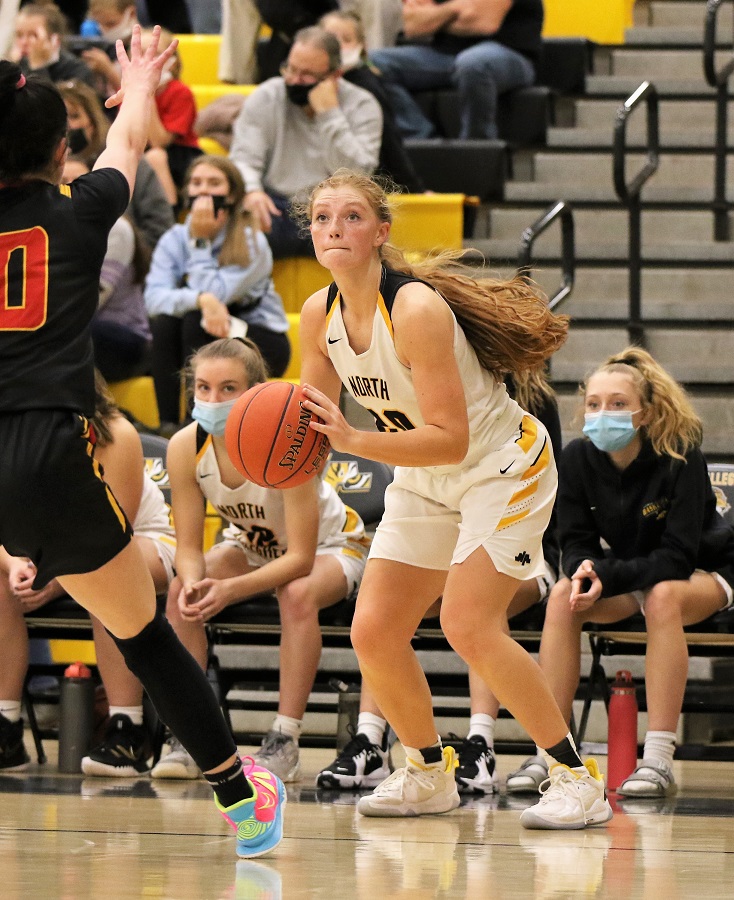 On day one of the Wright Automotive Holiday Tournament, the North Allegheny girls’ basketball team defeated the North Catholic Trojanettes on Tuesday afternoon, 50-37, in non-section play.

In a battle between two programs rich in history and WPIAL titles, North Allegheny and North Catholic faced off for the first time in 10 years. In the previous matchup, NA used a big first half to prevail, 73-60, at the 2011 Wright Automotive Holiday Tournament.

In similar fashion to the meeting a decade ago, the Tigers opened up a 32-14 lead by intermission thanks to an opportunistic defense and excellent perimeter shooting. Senior Emma Fischer knocked down three 3-pointers in the first half and junior Jasmine Timmerson buried one trey to spark a 16-2 run in the second quarter.

Timmerson opened the second half with a layup to increase the NA lead to 20 points at 34-14. However, North Catholic chipped away with a 12-0 run to trim the Tigers lead to just eight points late in the third quarter. The run by the Trojanettes was spurred on by sophomore Alayna Rocco, who posted a team-high 14 points. Nine of Rocco’s 14 points came in the second half.

Despite the third quarter charge by the Trojanettes, the Tigers answered back with a 16-0 run that put the game on ice. Timmerson’s penetrating drives and quick hands on defense stoked the fires of the NA run for an insurmountable 50-28 fourth quarter lead. With the game out of reach, North Catholic finished strong and ended the contest on a 9-0 run to bring the final score to 50-37, North Allegheny.

Along with her game-high 21-point performance, Timmerson also limited North Catholic standout Dacia Lewandowski to a paltry six points. For her efforts, Timmerson was named the Wright Automotive Player of the Game. Fischer also finished in double figures for the Tigers with 11 points.

With their 15th consecutive victory, North Allegheny improves to 5-0 overall, while North Catholic dips to 4-2 on the year. The Tigers will host Baldwin on Wednesday at 1:30 p.m. in day two of the Wright Automotive Holiday Tournament.