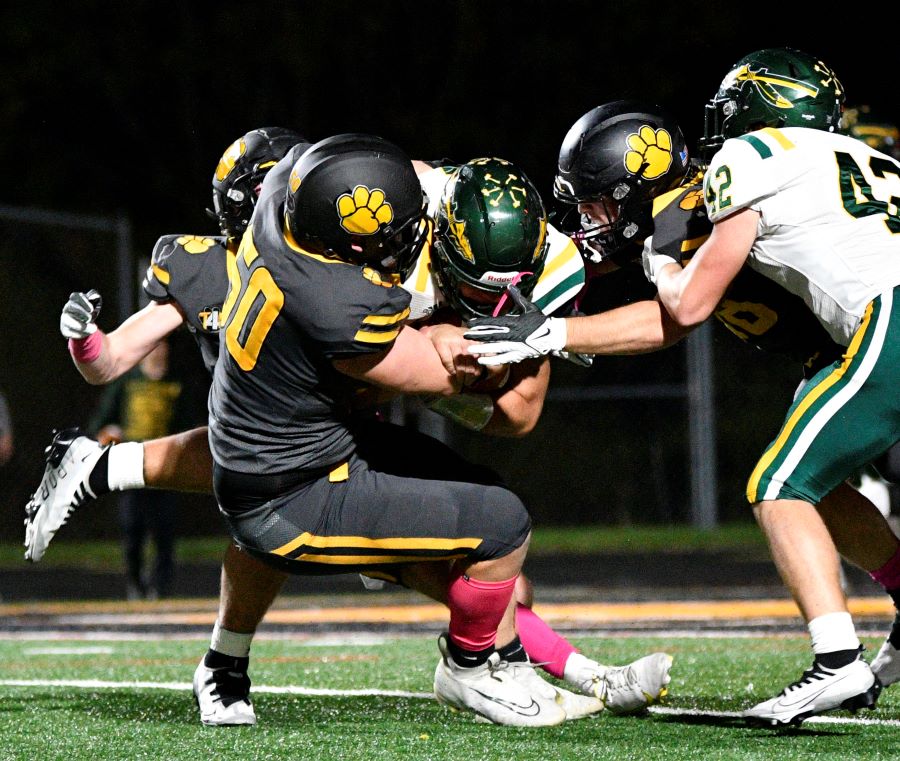 Facing Penn-Trafford for the first time since 2014, the North Allegheny Tigers defeated the visiting Warriors in a non-conference matchup at Newman Stadium, 20-3. Thanks to a Seneca Valley loss to Central Catholic elsewhere in Class 6A on Friday night, the Tigers locked up the Tri-County Conference title. It’s the fourth conference crown for North Allegheny in the last five years.

The first half between North Allegheny and Penn-Trafford was a defensive struggle with the two teams combining for three field goals and nine points. Following a three-and-out by Penn-Trafford on the game’s opening drive, a North Allegheny fumble on its first drive gave the Warriors possession at their own 42-yard line. Penn-Trafford marched 53 yards on 13 plays before the drive stalled. On a 3rd and goal from the NA 3-yard line, senior quarterback Conlan Greene was dropped for a 3-yard loss by junior lineman Cameron Chmura, forcing Penn-Trafford to settle for a field goal. Logan Swartz connected on a 23-yard chip shot to give the Warriors a 3-0 lead with 3:48 remaining in the first quarter. 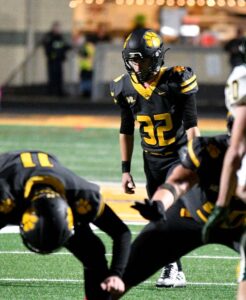 The Tigers defense shut down the Warriors in the second quarter, and following a pair of shanked punts by Penn-Trafford, NA put points on the board. Taking advantage of outstanding field position throughout the quarter, junior kicker Nick Van Winkle booted two field goals to give North Allegheny a 6-3 lead. The first of which was a career-long 42-yard field goal with 5:45 left in the half. Van Winkle’s second field goal was a 36-yard connection with 1:40 remaining before intermission. For his efforts, Van Winkle was named the Wright Automotive Player of the Game. The 42-yard field goal by Van Winkle was the longest at North Allegheny since Alex Greenblatt connected on a 43-yard field goal against Bethel Park in the 2010 WPIAL quarterfinals.

In the third quarter, junior Khiryn Boyd took over and gave the Tigers decided control of the game. On the opening kickoff of the second half, Boyd raced 98-yards for a touchdown and extended the NA lead to 13-3. With 3:11 left in the third quarter, Boyd intercepted a Greene pass and returned it eight yards to the PT 23-yard line. Three plays later, Boyd hauled in a 10-yard touchdown pass from junior quarterback Logan Kushner to bring the score to its eventual final, 20-3.

The three points allowed marked the third time this season that the NA defense has held an opponent without a touchdown. It’s the first time since 2018 that the Tigers have accomplished that defensive feat. Senior safety Marco Pascarella and junior linebacker Tyree Alualu also intercepted pass in the victory.

With the non-conference win, North Allegheny improves to 8-1 overall. Penn-Trafford, the reigning state champs in Class 5A, falls to 5-4 overall. The Tigers will host Seneca Valley next Friday in the regular season finale.