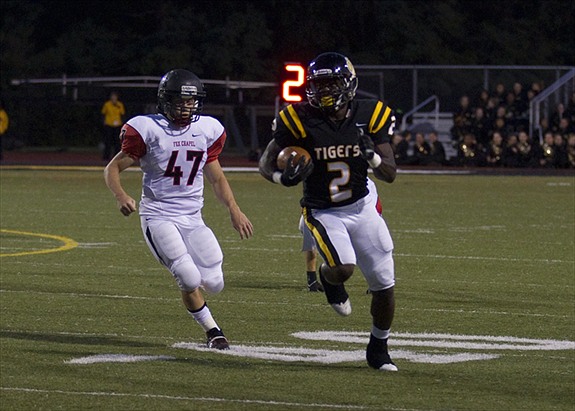 Junior quarterback Jeff Clemens threw two touchdown passes and senior running back Sean Idowu ran for two scores as North Allegheny cruised to a 42-7 Northern Eight Conference win over the Fox Chapel Foxes on Friday night. Clemens tossed a 37-yard touchdown pass to Elijah Zeise on a middle screen late in the first quarter and added another scoring strike with 1:17 to go in the second quarter with a 5-yard touchdown throw to tight-end Paul Blendinger to help give NA a 21-0 lead at halftime. Clemens finished the night completing 11 of 19 passes for 177 yards.

While the arm of Clemens helped jump start the Tigers in the first half, the legs of Idowu helped put the game away in the second half. On the first play from scrimmage in the third quarter at the NA 35-yard line, Idowu raced 41 yards on a carry to the Fox Chapel 24-yard line. Two plays later, Idowu capped a 49-second drive with a 12-yard touchdown run to balloon the Tigers lead to 28-0. With 3:19 to go in the quarter, Idowu scored again on a 15-yard rushing touchdown to give NA a 35-0 lead and invoke the mercy rule.

By game’s end, Idowu concluded with six carries for 83 yards and two scores, averaging 13.8 yards per carry. For his slashing runs that buried the Foxes in the second half, Idowu was named the Wright Automotive Player of the Game. Also aiding in the ground game was starting tailback Josh Bergman who carried the ball 13 times for 59 yards and a touchdown.

To their credit, the Foxes showed glimpses of their talent and ability in the game. On the ensuing drive following Idowu’s second score, Fox Chapel running back Nigel Garnett rambled 75-yards for a touchdown. The touchdown run was the only score for the Foxes in a one-sided affair. The Tigers finished the scoring with 7:31 on the clock in the fourth quarter when quarterback Cage Galupi found fullback Peter Mathews for an 8-yard touchdown pass and 42-7 lead.

The Tigers outgained the Foxes 478-157 and neutralized big-play threat Brandon Mitchell in the game.  The 6-6 senior wide-out caught only three passes for 41 yards. North Allegheny linebacker Layne Skundrich led the team in tackles for the second straight week with seven stops and a sack. Fox Chapel quarterback Billy Urso was held to 9 of 18 passing for 77 yards and one interception. The interception was snared by Zeise in the third quarter, setting up Idowu’s second touchdown run that sewed things up.

With the win, North Allegheny improves to 2-0 overall and 1-0 in the Northern Eight Conference. The victory also extends the Tigers winning streak to 18 straight games and 31 in-a-row against WPIAL opponents. Fox Chapel drops to 0-2 overall and in conference play. The Tigers will play their first road game next week with a visit to rival Seneca Valley. Fox Chapel will play out of conference with a home game against Latrobe.