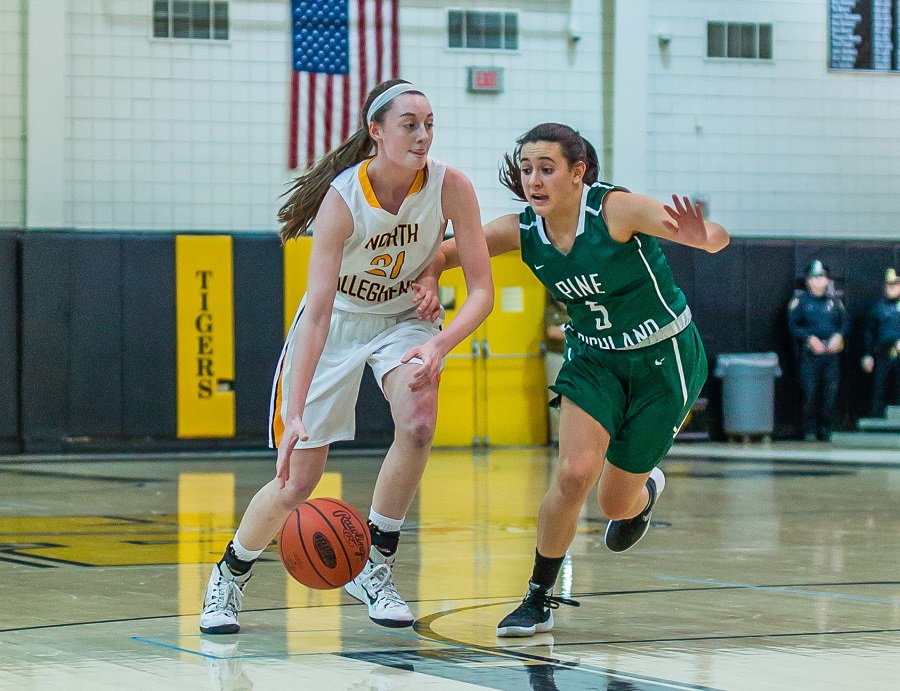 In what has developed into one of the best non-section rivalries in the WPIAL, the North Allegheny Lady Tigers won their latest joust with the Norwin Knights, 50-40, in the finale of the Wright Automotive Holiday Tournament. The Tigers built a 21-point lead in the third quarter and kept the Knights at arm’s length for the win.

Along with Morningstar’s shooting, the NA defense hounded Norwin into mistakes and limited the Knights to just 9-percent shooting in the first half. The Knights fell behind 31-10 before finally settling into the game and whittled their deficit to nine points at 42-33 early in the fourth quarter. Senior Abigail Gabauer paced Norwin with 15 points and senior Danielle McMaster added 13 points.

Despite Norwin’s comeback bid, the Tigers outlasted the Knights with another terrific all-around effort. Senior Hailey Zeise netted a team-high 12 points with eight rebounds, three steals and three assists. Junior Madelyn Fischer added 10 points and eight rebounds. Sophomore Rachel Martindale narrowly missed out on a double-double with nine points and nine rebounds. Defensively, North Allegheny limited Norwin to 23-percent shooting on the night. It’s the third straight game NA has held an opponent to under 30-percent from the field.

Named to the all-tournament team were junior Piper Morningstar and senior Hailey Zeise for North Allegheny. The North Allegheny Sports Network spoke with Zeise prior to Thursday’s game. (You can watch the interview with Zeise below.)

North Allegheny leaps to 9-0 overall on the season. Norwin slips to 5-4 on the campaign. The Tigers will return to action on Monday night at Shaler in Section 1-AAAAAA action.