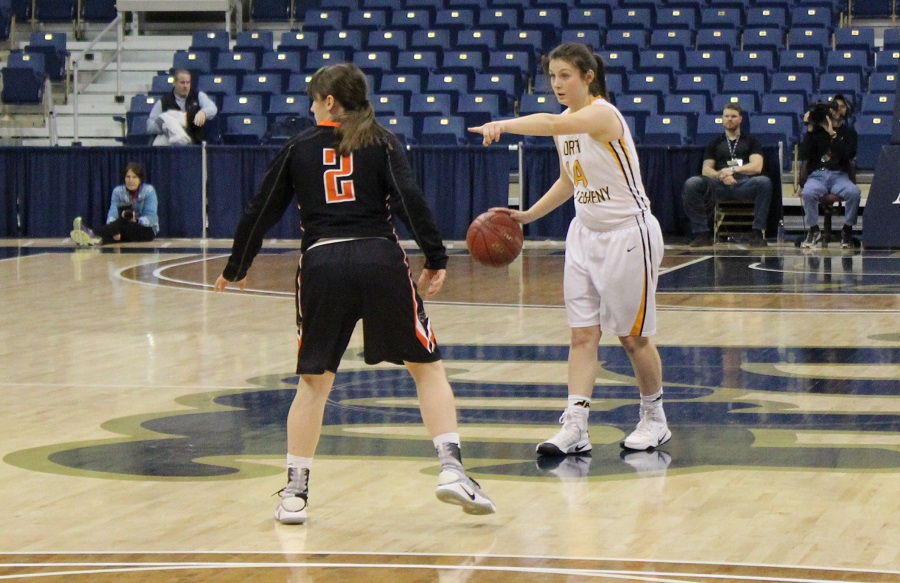 On Saturday night at the Petersen Events Center, the top-ranked North Allegheny Tigers (24-0) will make a third straight appearance in the WPIAL championship game when they take on the No. 2 Peters Township Indians (21-3) at 7:00 p.m. The Tigers are vying for back-to-back WPIAL crowns after becoming the first team to win a Class 6A girls’ basketball title with a 50-39 triumph over Bethel Park last season. It was also the first WPIAL title for the North Allegheny girls’ basketball program.

Peters Township is looking for its first ever WPIAL championship and is appearing in the title game for the first time since 2008 when the Indians dropped a 69-40 decision to Upper St. Clair at the A.J. Palumbo Center. The Indians are in the midst of a renaissance under head coach Bert Kendell, the Big 56 Conference Section 3 Coach of the Year. In his fifth year as head coach, Kendall inherited a program that was 3-19 overall and 0-12 in section play before his arrival and taken them to three straight WPIAL appearances, including this season. The Indians had lost 20 consecutive section games from 2012-2013.

Peters Township is led by standout junior guard Makenna Marisa, a Division I prospect and a three-time first team all-section honoree. Marisa scored her 1,000 career point in a 67-54 loss to North Allegheny on Feb. 8.

After winning the WPIAL title and reaching the PIAA championship game a season ago, the Tigers rolled through the regular season and postseason in 2017-2018 with a 24-0 record. North Allegheny recently cracked the nationally renowned USA Today Top 25 poll and defeated Upper St. Clair, 45-26, and Mt. Lebanon, 34-20, en route to the title game. North Allegheny boasts the best scoring defense in Class 6A, permitting only 38.1 points per game. The Tigers also rank second in Class 6A in scoring offense, averaging 57.0 points per contest.

On its trek to the title game, Peters Township toppled Hempfield in the WPIAL quarterfinals, 48-40, and Bethel Park in the semifinals, 55-39. The Indians average 53.5 points per game and permit 45.0 points per game on defense.

North Allegheny has won six in a row against Peters Township, including a non-section win a few weeks ago in the south hills. The Indians have not defeated the Tigers since a 56-43 decision on Dec. 9, 2008.