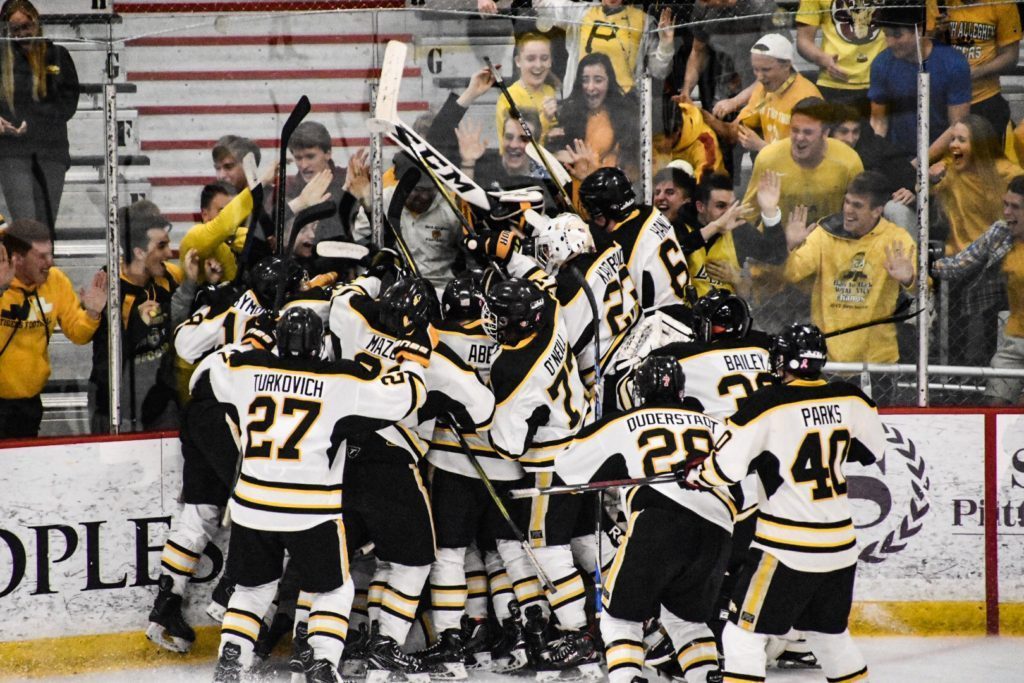 Junior Will Parreaguirre’s game-winning goal at 5:06 of the second overtime propelled North Allegheny to a 2-1 victory over Bethel Park in the Class AAA PIHL Penguins Cup semifinals. Parreaguirre’s hard wrist shot beat Bethel Park goalie Nick Guimond at 12:40 Friday morning, ending another classic playoff marathon against the Black Hawks. The contest was the fourth to go into overtime in the last five playoffs meetings between the two schools.

North Allegheny advances to face Peters Township in the PIHL championship on Tuesday night at 8:30 p.m. The Indians also needed double overtime to defeat Mt. Lebanon in their semifinal, 3-2.

Appearing in the PIHL semifinals for the fifth straight season, North Allegheny struck first against Bethel with a Tyler Putnam goal at the 6:11 mark of the first period for a 1-0 lead. Putnam’s goal was assisted by Vincent Abel and Dylan Watkins.

While North Allegheny had the better of the scoring chances in the first period, Bethel Park began to assert itself midway through the second period. The persistent pressure resulted in a 5-on-3 power play opportunity and Bethel Park cashed in thanks to an Austin Read marker with 1:40 remaining in the second period, tying the game at 1-1.

The contest remained deadlocked all the way into the second overtime despite continuous scoring opportunities for Bethel Park. North Allegheny goalie Richie Karapandi remained poised in net under a barrage of Black Hawk shot attempts, making an astonishing 53 saves to earn Wright Automotive Player of the Game honors.

With Karapandi holding Bethel Park at bay, the Tigers were able to finally find the game-winning goal thanks to a BP turnover that resulted on a 2-on-1 break. That set the stage for Parreaguirre’s heroics and game-winning tally at the 5:05 mark of the second overtime for a 2-1 North Allegheny win.

North Allegheny advances to the PIHL Class AAA championship against Peters Township on Tuesday night at the UPMC Lemieux Sports Complex at 8:30 p.m. The game will be broadcast live via the internet on the North Allegheny Sports Network.