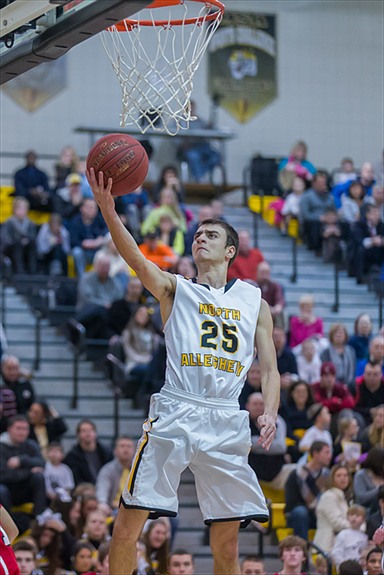 Third-seeded North Allegheny opened the second half with a 21-0 run en route to an 82-59 triumph over the sixth-seeded Hempfield Spartans in the WPIAL Class AAAA quarterfinals. The Tigers led 36-27 at the half and busted the game wide open with the devastating third quarter run. North Allegheny’s strengths, the full court press and three-point shot, were on full display against the Spartans on Saturday.  Hempfield was hampered by the press in the first half and matters only got worse in the second. From beyond the arc, the Tigers poured in 12 three-pointers, including five by senior Joe Mancini who finished with a game-high 22 points.  Mancini received the Wright Automotive Player of the Game honors.

Returning from injury, junior Cole Constantino returned and drained three treys on his way to a 15 point day.  Senior Mike Carter dropped in a pair from the outside and finished with a 16 point performance.

For the Spartans, Kason Harrell scored eight points in the first quarter but was held in check for the remainder of the game.  Harrell netted 21 points by game’s end but the majority of those points came once the competitive phase of the contest was complete.  Junior center Tony Pilato scored a 19 points for the Spartans.

The win gives North Allegheny a record of 21-3 while Hempfield drops to 21-3.  The Tigers advance to the WPIAL Semifinals to face Section 3 foe Hampton on Wednesday night.  NA split regular season meetings with Hampton with both teams winning on their home floor. Hempfield can still reach the PIAA playoffs if the Tigers win the WPIAL title.