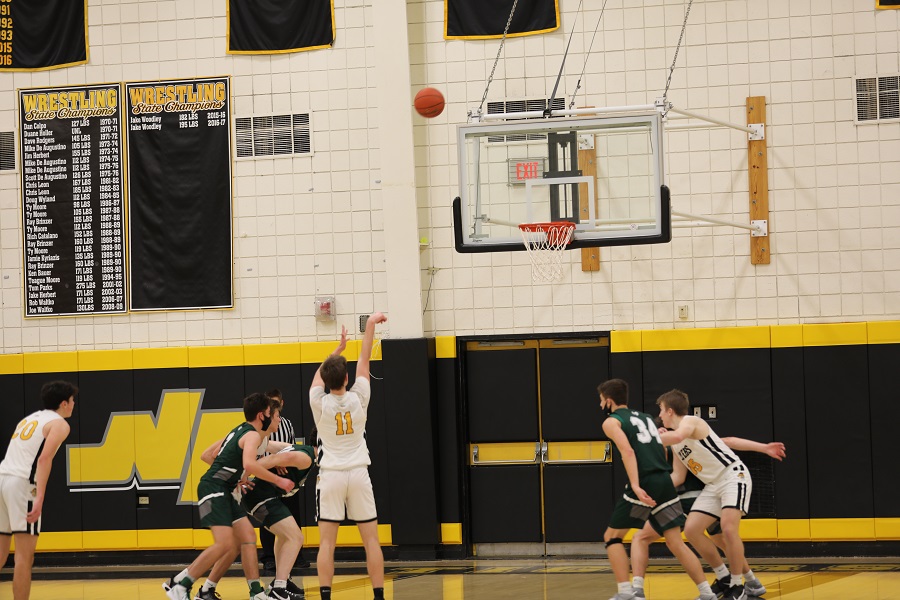 The North Allegheny boys’ basketball team rallied from 16-point deficit in the second half for an 83-77 victory against neighborhood rival Pine-Richland on Friday night. The win kept the Tigers undefeated in Section 1-6A action and snapped a nine-game losing streak in the head-to-head series with the Rams. It was the first win against Pine-Richland since a 71-69 triumph on Dec. 15, 2015.

The game began inauspiciously for the Tigers as the visiting Rams stampeded to a 17-4 lead in the first quarter. Pine-Richland led by double figures through most of the game and stretched out the lead to 48-32 midway through the third quarter. Junior Joey Dudkowski spearheaded the effort for the Rams with a game-high 33-point performance.

Despite the slow start, North Allegheny chipped away and cut the deficit to 54-43 by the end of the third quarter. The Tigers defense ramped up the pressure in the fourth quarter and NA shot 71-percent (10-for-14) in the final stanza. Timely defensive stops by juniors Matt McDonough and Kyrell Hutcherson aided the comeback bid as the defense forced 17 turnovers. Three-pointers by McDonough and junior Robby Jones proved pivotal down the stretch. Ultimately, with 9.2 seconds remaining, the Tigers completely erased the deficit with a basket in the paint by senior Khalil Dinkins that tied the game at 69-69 and forced overtime. Dinkins finished with 10 points and was one of five Tigers in double figures.

In overtime, North Allegheny continued to ride the wave of momentum and pulled out an 83-77 victory with solid shooting from the free-throw line and careful possession of the basketball. The Tigers shot 66-percent (19-for-29) from the charity stripe, while the Rams converted on just 57-percent (8-for-14) from the line.

Similar to the team’s slow start, senior forward Greg Habib was scoreless in the first quarter but finished with a team-high 23 points, scoring 15 in the second half and overtime. Also touching double figures was McDonough with 17 points, Jones with 15 points and Hutcherson with 10 points. With a great all-around performance, adding a team-best three steals and four assists, McDonough was named the Wright Automotive Player of the Game.

North Allegheny improves to 3-1 overall and sits atop the Section 1-6A standings with a 3-0 record. Pine-Richland falls to 1-2 overall and 0-2 in the section. The Tigers will host the third-ranked team in Class 5A, the Chartiers Valley Colts, on Saturday night at 7:30 p.m. at the MLK Weekend Showcase.