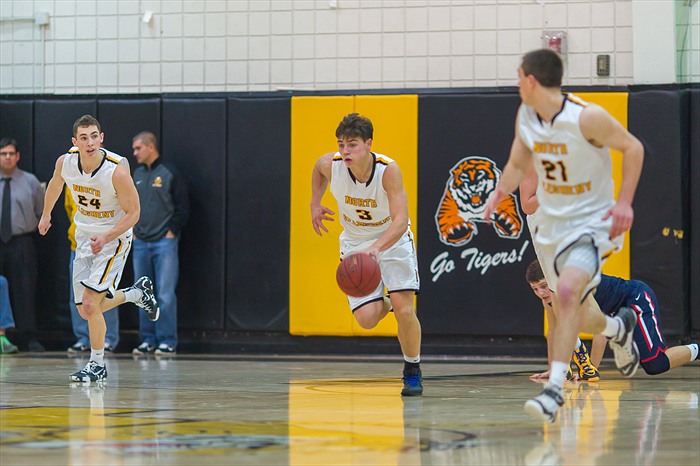 In a topsy-turvy game at Pine-Richland, the North Allegheny boys’ basketball team outlasted the Rams, 76-74, for a Section 3-AAAA win on Tuesday night.  Pine-Richland’s Alex Goltz had a chance to win it at the buzzer but missed a three-pointer, allowing NA to hang on for the win.

The Tigers tore through the Rams in the first half and built a 42-25 lead by intermission behind the strong play of Cole Constantino.  The senior guard drove to the cylinder at will, scoring 17 of his game-high 30 points in the first half.

North Allegheny’s 17-point lead disintegrated in the second half, however, as Pine-Richland stormed back to take a 64-60 lead midway through the fourth quarter.  The Rams had four players touch double digits, including Adam Alexander who was 3 of 7 from beyond the arc and poured in a team-best 21 points. Andrew Petcash scored 18 points, Phil Jurkovec added 17 and Goltz chipped in with 12.

When a Petcash layup brought the score to 64-60, Rams, with 4:46 remaining, the Tigers swung the momentum back in their favor with an 11-0 run in less than two minutes of game action. Will Sandherr, Constantino, and Keegan Phillips knocked down three-consecutive three-pointers to give the Tigers a 69-64 lead.  After connecting on the third trey, Phillips jumped a PR pass for a steal and layup to expand the NA lead to 71-64 with 2:51 remaining.

The Rams wouldn’t go away quietly, though, and cut the NA lead to 75-74 on a Jurkovec layup with 11 seconds left.  Constantino was fouled and made 1 of 2 shots from the free-throw line to bring the score to 76-74, Tigers. After Constantino missed the second free throw, Goltz had a chance to win the game for Pine-Richland but missed on his three-point attempt and North Allegheny survived for a two-point victory.

Along with Constantino’s 30 points, Sandherr scored 12 points and Mike Fischer tallied 11 points to pace the Tigers.

North Allegheny remains unbeaten and improves to 5-0 overall and 2-0 in Section 3-AAAA.  Pine-Richland suffers its first loss of the year and falls to 4-1 overall and 0-1 in section play. The Tigers host Gateway on Friday night in a non-section affair from NASH.  Tip-off is set for 8:00 pm.