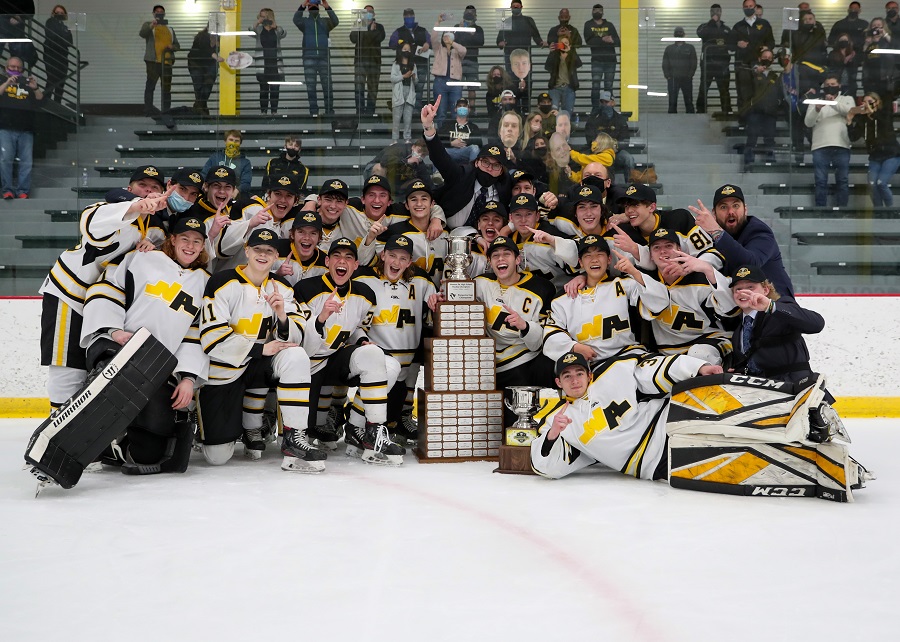 On the strength of three third period goals, and a dazzling performance in net by senior goalie Josh Bailey, the North Allegheny ice hockey team won its fourth Penguins Cup championship with a 4-1 triumph over the Mt. Lebanon Blue Devils at the RMU Island Sports Center. The Tigers became the first team since Bethel Park (2000-2002) to win consecutive titles in Class AAA. NA won the 2019 PIHL crown, and with no championship awarded due to COVID-19 in 2020, the Tigers made it back-to-back titles with their win on Monday night.

Looking to get off to a quick start, the fourth-seeded Tigers struck first just 3:40 into the game. Matt Irvin led a 3-on-1 break and delivered an accurate pass to Austin Peterson on the right wing. Peterson then found a wide-open Nate Spak in front of the net for his first goal of the playoffs and a 1-0 lead.

The seventh-seed Blue Devils were the lowest seed to reach the Class AAA final since No. 8 Canon-McMillan beat Seneca Valley in overtime in 2010. Winners of six of its previous seven games entering the title tilt, upstart Mt. Lebanon gave North Allegheny all it could handle in the second period. Outshooting the Tigers 20-5 in the stanza, the Blue Devils’ persistence paid off with a goal by Sam Mitchell at the 6:09 mark and the game was deadlocked, 1-1. Mt. Lebanon continued to pepper Bailey with shots in the second period but NA’s net minder remained stoic as the game stayed tied by intermission. Bailey made 33 saves on 34 shot attempts to earn the victory.

Needing to kill off three penalties in the second period, a seemingly exhausted North Allegheny team was reinvigorated after intermission. In the third period, the Tigers outshot the Blue Devils, 10-6, and took a 2-1 lead on a Connor Chi wrist shot from the high slot that beat ML goalie Austin Martin at the 8:04 mark. NA gained some insurance at the 13:56 mark of the third thanks to a goal by Peterson, his team-leading fourth of the playoffs, for a 3-1 advantage. Sophomore Trey Gallo put the game away with an empty-net marker that was lofted into the Mt. Lebanon net from approximately 170 feet away with just 1:03 remaining to cap a 4-1 victory.

North Allegheny turns its focus next toward the Class AAA Pennsylvania Cup championship game on Saturday at 4:30 p.m. at the UPMC Sports Complex in Cranberry. The Tigers will try to win their third state title when they take on Malvern Prep, who defeated La Salle College High School on Monday night, 4-3 in overtime, in the Flyers Cup title game.