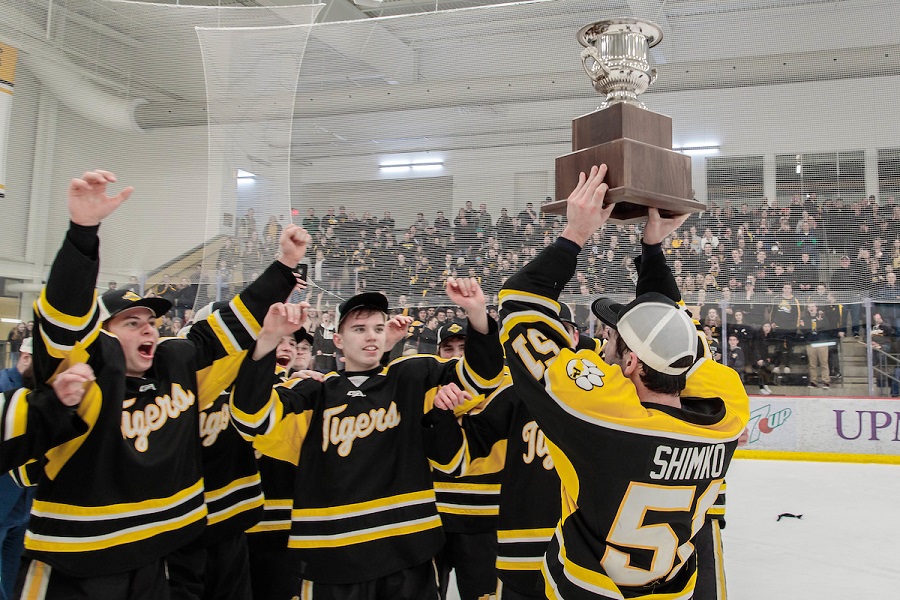 After a thrilling 3-0 victory over Peters Township in the Class AAA Penguins Cup final on Tuesday night, the North Allegheny ice hockey team turns its attention to a state title this afternoon. The Tigers will face off against the Flyers Cup champion LaSalle College High School Explorers in the Pennsylvania Cup Championship Game at 4:00 p.m. at the RMU Island Sports Center. The game will be broadcast live via the internet by the North Allegheny Sports Network and can be found by clicking here.

North Allegheny is appearing in the Pennsylvania Cup for the first time since 2013. During the 2013 drive to glory, the Tigers defeated Peters Township in the Penguins Cup final, 2-0, and defeated LaSalle College in the state championship, 6-2. Joe Griffin, who went on to play at the University of Pittsburgh, navigated through the Explorers for four goals in the title tilt six years ago, including a natural hat trick in the second period. Goalie Bradford Thornburgh made 35 saves to earn the win.

Taking a similar path this season, the 2018-2019 Tigers also blanked Peters Township in the Penguins Cup final and will again meet LaSalle College in the Pennsylvania Cup championship. North Allegheny is vying for its third state crown, with the previous championships coming in 2007 and 2013.  (For highlights of NA’s win on Tuesday night over Peters, see video below.)

LaSalle College is hoping to become Pennsylvania Cup champions for the sixth time in program history. The Explorers have discovered state titles in 1998, 2008, 2009, 2012 and 2016.

Under the guidance of 21st-year head coach Walter Muhlbronner, who also serves as the assistant director of admissions at the catholic school, the Explorers have won eight Flyers Cups and four state championships. LaSalle finished 8-0 in the Atlantic Prep Athletic Conference and then went on to beat Holy Ghost Prep, 5-4, and St. Joseph’s Prep, 5-2, in the Flyers Cup playoffs. On the brink of elimination in the semifinals, LaSalle rallied for two goals in the final minute of the third period, within an 11-second span, for a miraculous win over Holy Ghost Prep.

The Explorers boast an explosive offense led by Daniel Sambuco, who led the APAC in goals with 15. Sophomore Sam Lipkin paced the APAC in assists (21) and points (34). Goalie Aiden McCabe has been the starting net minder and made 20 saves in the Flyers Cup win at the Wells Fargo Arena.

The opening faceoff between North Allegheny and LaSalle is slated for 4:00 p.m. at the RMU Island Sports Center.  Come out and support the Tigers!