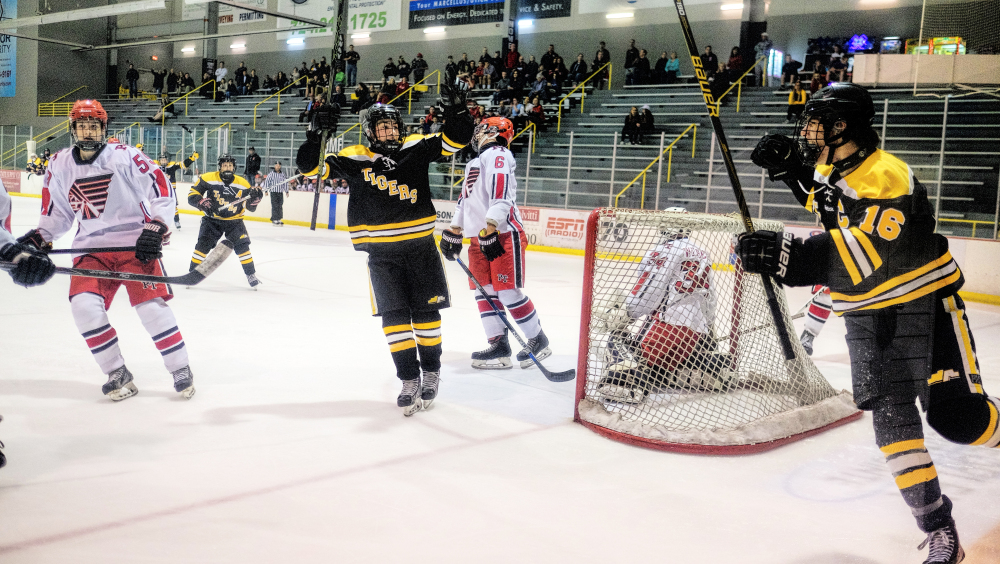 The North Allegheny ice hockey team skated to a 2-2 tie with the Peters Township Indians on Thursday night at the Iceoplex in Southpointe. Goalie Ryan Heil stopped 21 of 23 shots to force the draw and help the Tigers pick up a point in the Class AAA standings. The game was a rematch of last year’s classic PIHL semifinal contest that saw North Allegheny defeat Peters Township in overtime, 4-3.

North Allegheny opened the scoring at 9:00 of the first period on a goal by Dawson Richard to put the Tigers in front, 1-0. The Indians took advantage of a power play opportunity in the second period and cashed in courtesy of a Jeremy Anthos marker to even the score at 1-1.

Peters Township took a 2-1 lead at the 7:31 mark of the third period on a Colin Dinardo goal. North Allegheny answered back with 4:06 remaining in regulation to tie the game at 2-2 thanks to another clutch goal by Cameron Zahn. A year ago in the PIHL semifinals, it was Zahn who scored the game-winner in overtime to beat the Indians. Thursday’s regular season game also went to overtime, but this time around neither team could find the net in the extra session as the game ended in a 2-2 deadlock.

North Allegheny and Peters Township own a 2-0-1 record following the tie, are tied for second place in the Class AAA standings. The Tigers return to the ice on Monday for a home game against the Upper St. Clair Panthers. The puck drops at 9:00 p.m.