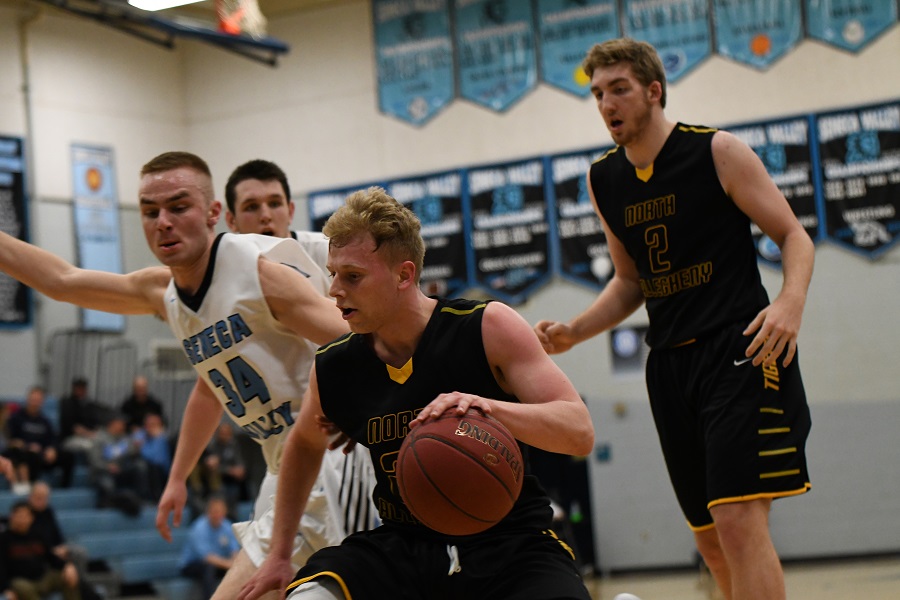 The Seneca Valley Raiders ended a three-year playoff drought with a 39-32 win over the North Allegheny Tigers on Tuesday night in Section 1-6A action. The Raiders captured the final playoff spot in the section with the win and snapped a 20-game losing streak to the Tigers. The loss eliminates North Allegheny from playoff contention.

With a win at hand over Seneca Valley from earlier in the season on Jan. 15, the Tigers were trying to keep their playoff hopes alive with another victory over their section rival. NA sparred with the Raiders in a low-scoring first half and trailed 19-14 at intermission. Seneca Valley senior Chris Hart led the way with nine points in the first half on his way to a 12 point night.

In the third quarter, Seneca Valley stretched out the lead to 26-16 courtesy of senior Jacob Banofsky who scored seven of his 12 points in the second half.

Playing in a do-or-die game, the Tigers refused to go away quietly and battled back thanks to junior Anthony Hattrup and senior Ray Sandherr. Hattrup led the Tigers with 12 points and five rebounds, while Sandherr was making his return from an ankle injury that kept him out of action for approximately two weeks. Sandherr not only sparked the team with his inspiring effort but added eight points and four steals on his way to Wright Automotive Player of the Game honors.

Rallying from a 10-point deficit in the second half, the Tigers came all the way back to even the score at 31-31 on a 3-pointer by Sandherr with 3:13 remaining in the game.

Despite NA’s comeback, the Raiders ended the game on an 8-1 run to seize a 39-32 victory and clinch their first playoff berth since the 2013 season when SV reached the WPIAL semifinals and state playoffs.

North Allegheny slides to 7-13 overall and 3-8 in Section 1-6A following the loss. Seneca Valley jumps to 13-7 overall and 6-5 in section play. The Tigers will round out their section schedule on Friday night with a home game against the North Hills Indians. The game will be broadcast live via the internet on the North Allegheny Sports Network.