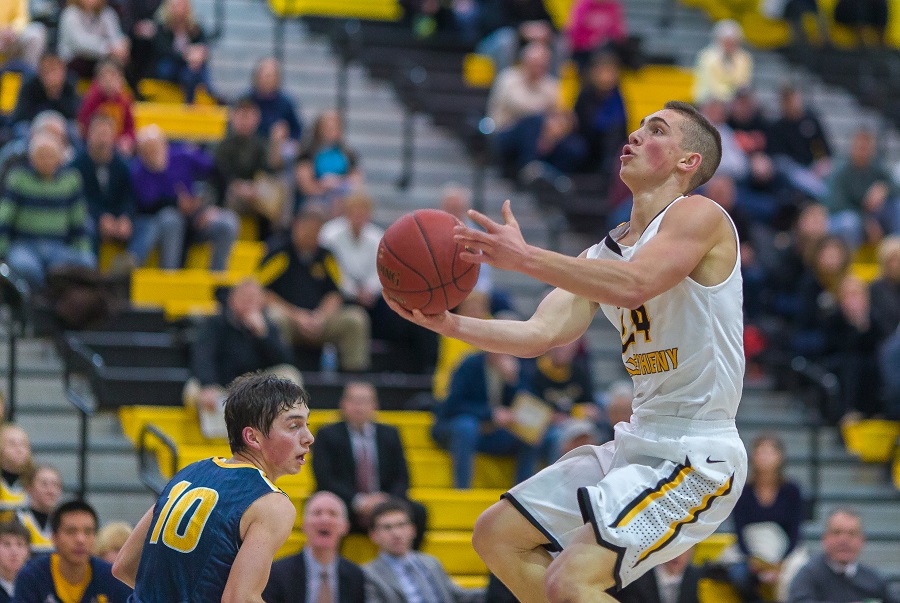 Collin Luther’s lay-up with 52 seconds remaining in overtime lifted the Hampton Talbots to a 62-61 win over the North Allegheny Tigers on Wednesday night.  The Talbots were playing without Pitt-recruit and star forward Ryan Luther who missed the game due to an ankle injury, but Hampton managed to edge the Tigers for a one-point victory. The win keeps Hampton undefeated with a 12-0 mark and 5-0 record in Section 3-AAAA.  North Allegheny suffers its first loss of the season, dropping to 10-1 overall and 4-1 in section play.

In a tightly contested affair, the game saw 12 lead changes with neither team leading by more than six points at any stage. With two of the highest scoring teams in Quad-A facing off, it was the defenses that took hold as both teams were held to their lowest scoring output of the season.  North Allegheny’s propensity to shoot the three was put on hold as the Talbots limited clean outside looks.  North Allegheny was contained to just two successful treys in the opening half, allowing Hampton to take a 28-24 lead into halftime. The hot shooting of Jack Morrison and David Huber guided the Talbots to their four point lead at intermission. Morrison scored eight points in the half and Huber posted nine on his way to a 14 point night.

In the second half, the Tigers typical frenetic pace began to take shape and junior guard Cole Constantino caught fire.  Constantino scored a game-high 21 points, pouring in 15 points after halftime, and opened some outside looks for players like junior Mike Fischer who drained a pair of long distance treys. Constantino was named the Wright Automotive Player of the Game by the North Allegheny Sports Network.

North Allegheny was also aided by the muscle of Elijah Zeise and David Haus down low in the second half. The duo of Zeise and Haus combined for 17 points and 15 rebounds. With 2:20 remaining in the third quarter, a layup by Zeise gave the Tigers the largest lead of the game at 40-34. The Talbots answered with a Joey Lafko three pointer and an 8-3 run to end the period trailing NA, 43-41.

Riding the hot hand of Constantino, the Tigers held a slim lead throughout most of the fourth quarter until another three-pointer by Lafko gave Hampton a 57-55 lead with 2:58 to play. Lafko had a huge second half for the Talbots, knocking down three treys and scoring 12 of his 14 points after halftime.

Following Lafko’s three-pointer, NA senior Joe Mancini missed on a three-point try and the Talbots corralled the rebound.  However moments later, Haus came through with a hustling steal and time out to give NA possession with two minutes remaining.  The theft paid off for the Tigers when Constantino delivered with a two-point jumper to tie the score at 57-57 with 1:41 to go regulation. Haus followed by stealing the inbound pass from the Talbots but NA was unable to convert the turnover into a go-ahead bucket.  Hampton held for the last shot of regulation and a perimeter attempt by Hayden Seserko rimmed out to send the game to overtime.

In the extra period, North Allegheny grabbed a 61-60 lead on a Mike Carter bucket with 2:36 remaining before Collin Luther’s layup put Hampton ahead by one, 62-61, with 52 seconds left.  The Tigers missed two jumpers over the next 41 seconds before Jack Obringer hauled in a critical rebound near the baseline, leaped into the air and called a timeout before falling out of bounds with 10.7 seconds remaining in OT. After the timeout, the Tigers fouled Joe Huber with 4.7 seconds on the clock, putting the junior at the foul line for a one-and-one free-throw attempt.  Huber failed on the front end and Haus quickly grabbed the rebound and passed to Constantino up court whose floater from the left side of the lane narrowly missed its mark as Hampton hung on for the 62-61 victory.