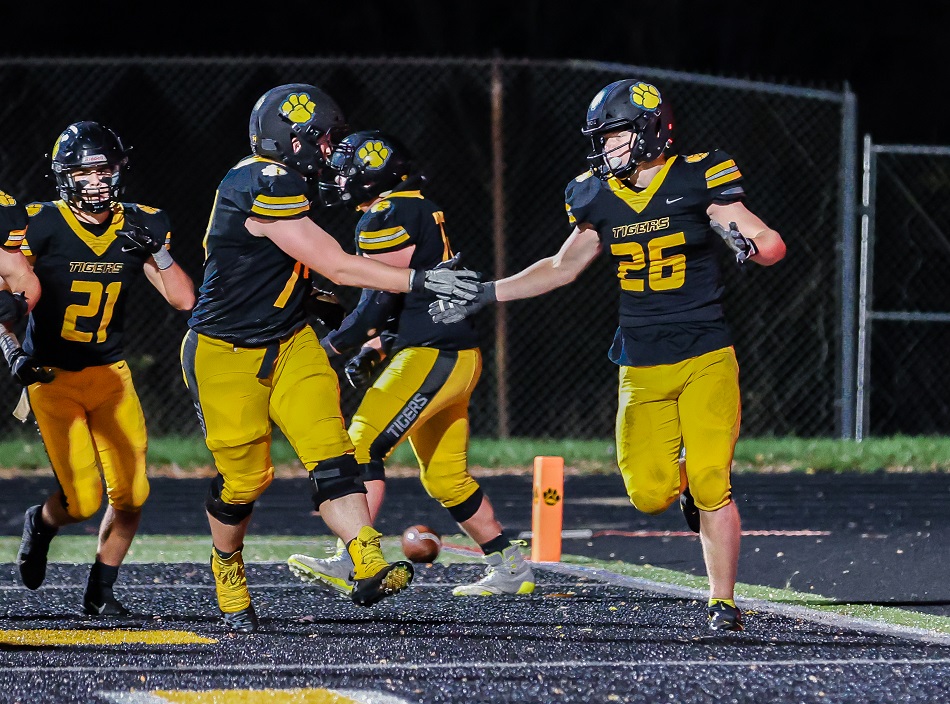 The North Allegheny Tigers punched their ticket to the WPIAL championship game for the first time since 2012 with a 21-7 win over the Seneca Valley Raiders on Friday night at Newman Stadium. In a clash of the top two scoring defenses in Class 6A, it was the North Allegheny defense that dominated the action by limiting Seneca Valley to just 81 total yards of offense. Unable to sustain a drive, the Raiders were only 1 of 10 on third down conversions.

After a scoreless first period, the North Allegheny offense got rolling early in the second quarter thanks to a big play from running back J.R. Burton. Starting at their own 39-yard line, a 59-yard sprint by Burton to the SV 2-yard line set up the game’s first score. After a false start penalty, North Allegheny scored on the next play when senior running back Nate Hoke dove into the end zone for a 7-0 lead with 8:37 remaining in the second quarter.

Late in the quarter, North Allegheny put together a 15-play, 71-yard march that was keyed on a fourth down conversion deep in Seneca Valley territory. Faced with a 4th and 7 from the 39-yard line, quarterback Greg Phillips rifled a pass over the middle to a crossing Mason Kress for an 18-yard pick up and first down at the Raiders 11-yard line. A few plays later, Hoke plunged into the end zone for his second touchdown of the night and a 14-0 NA lead with six seconds to go before halftime.

It was more of the same in the third quarter as the NA defense controlled the line of scrimmage, while the Tigers offense churned out more yards on the ground. Late in the third quarter, North Allegheny put together a six play, 71-yard drive that culminated on a 12-yard rushing touchdown by senior Khalil Dinkins for a 21-0 lead with 2:11 left in period.

It appeared the Tigers were on their way to another touchdown drive in the fourth quarter when an NA turnover briefly changed the complexion of the game. A fumble on a pitch out was recovered by Seneca Valley’s Deontae Webb and returned 85 yards for a touchdown, trimming the score to 21-7, Tigers, with 7:57 remaining.

With the Raiders offense held in check all game long, a comeback was not in the cards for Seneca Valley. On the Raiders last-gasp drive, Hoke sacked and intercepted sophomore quarterback Graham Hancox to clinch the victory for North Allegheny and a berth in the WPIAL title game next week. With two rushing touchdowns, a sack and an interception, Hoke was named the Wright Automotive Player of the Game.

Making his return from injury following a three-week absence, Seneca Valley running back Ethan West was limited to just 35 yards on 11 carries. Hancox was equally ineffective in the passing game, completing only 8 of 23 passes for 36 yards and two interceptions. Along with Hoke, junior defensive back Kolin Dinkins also hauled in an interception for the Tigers.

Offensively for North Allegheny, Burton finished with 91 yards on 17 carries, while Phillips completed 8 of 15 passes for 112 yards.

North Allegheny improves to 6-0 overall with the win, while Seneca Valley’s season ends with a 4-3 record. The Tigers will face the Central Catholic Vikings next Friday from Martorelli Stadium in the WPIAL championship game. The contest will be broadcast live via the internet on the North Allegheny Sports Network.