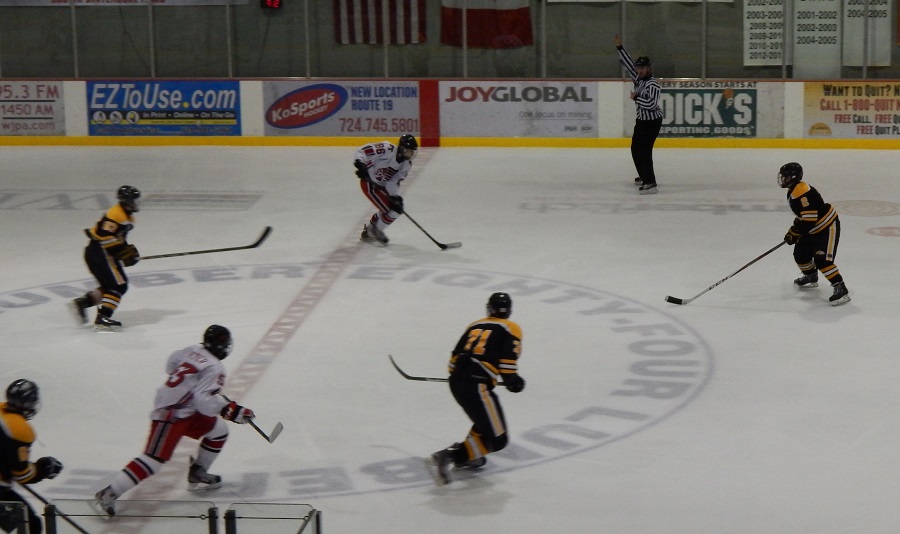 Tigers Tripped Up By Peters Township, 3-1

The Peters Township Indians earned a measure of revenge from last season’s loss to the Tigers in the 2013 PIHL Championship Game by picking up a 3-1 victory over North Allegheny on Wednesday night at the Iceoplex in Southpointe.  All the game’s goals were scored in the second period as Peters Township jumped to a 2-0 lead behind a power play and short handed goal.  Brady Cochrane’s power play goal at the 12:32 mark of the period put the Indians on top, 1-0.  Just 30 seconds later, PT’s Chad Wyatt was called for an elbowing penalty and it appeared the Tigers were poised to tie the game.  However, Adam Alavi tallied a short handed goal at 14:20 of the period to bring the score to 2-0, Indians. North Allegheny answered two minutes later with a marker by Michael Kramer, assisted by William Rahenkamp and Dawson Richard, to trim the score to 2-1.  Peters Township’s Evan Opeka scored with just two seconds to go in the period to give the Indians a 3-1 lead.  With a quiet third period, the Indians held on for the two goal victory.

North Allegheny falls to 1-1 on the season while Peters Township improves to 2-1.  The Tigers return to action on Tuesday night with a road game against Pine-Richland.  Start time is slated for 9:10 pm.