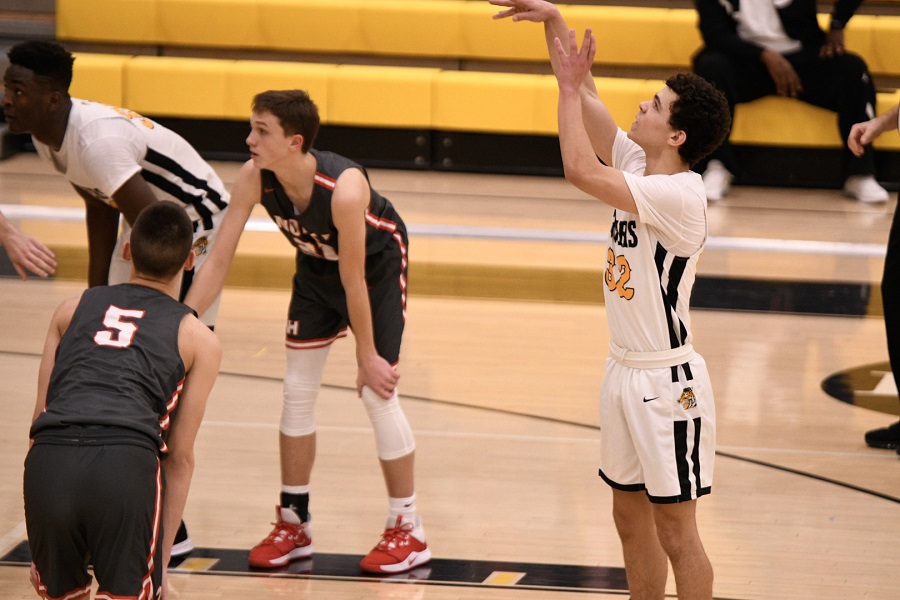 The North Allegheny boys’ basketball team won its third consecutive game and defeated the North Hills Indians on Tuesday night, 57-51, to climb into the third place in the Section 1-6A standings. The victory was also the fifth in a row for the Tigers in their head-to-head series with the Indians.

In a back-and-forth contest throughout the night, the game wasn’t decided until the waning minutes. Trailing by two points midway through the fourth quarter, North Allegheny took a 51-50 lead on a 3-pointer from junior Ethan Lake. Lake finished with eight points and provided some good minutes off the bench for the Tigers.

With 2:29 to play, North Hills senior Logan Marshalek went to the charity stripe and made 1 of 2 free throws to tie the score at 51-51. North Allegheny answered back with 1:48 remaining in the game courtesy of a layup by junior Khalil Dinkins to reclaim the lead, 53-51. On the ensuing possession, Matthew Seidl missed on a pull-up jumper and North Allegheny grabbed the rebound. With less than a minute to play, North Hills applied pressure and seemingly garnered a crucial steal. However, the Indians turned the ball over immediately on a steal by Grant Timmerson, who was fouled while driving to the basket.

With 41 seconds left in the fourth, Timmerson made two free throws to extend the NA lead to 55-51. Timmerson totaled 12 points and eight rebounds.

Following another missed jumper by North Hills, the Tigers put the game on ice with two more free throws from Zach Andreykovich to close out a 57-51 victory. Andreykovich tallied 13 points and three 3-pointers and facilitated a team-high five assists. North Allegheny ended the game on a 9-1 run.

The Wright Automotive Player of the Game was Dinkins who posted a double-double with 14 points and 10 rebounds. Dinkins also netted the game-winning basket.

Also contributing to the win was senior Nate Campbell who provided some hard-nosed defense and dished out four assists.

For the Indians, Alex Smith led with 15 points and Seidl added 13 points. Marshalek chipped in with 12 points for North Hills.