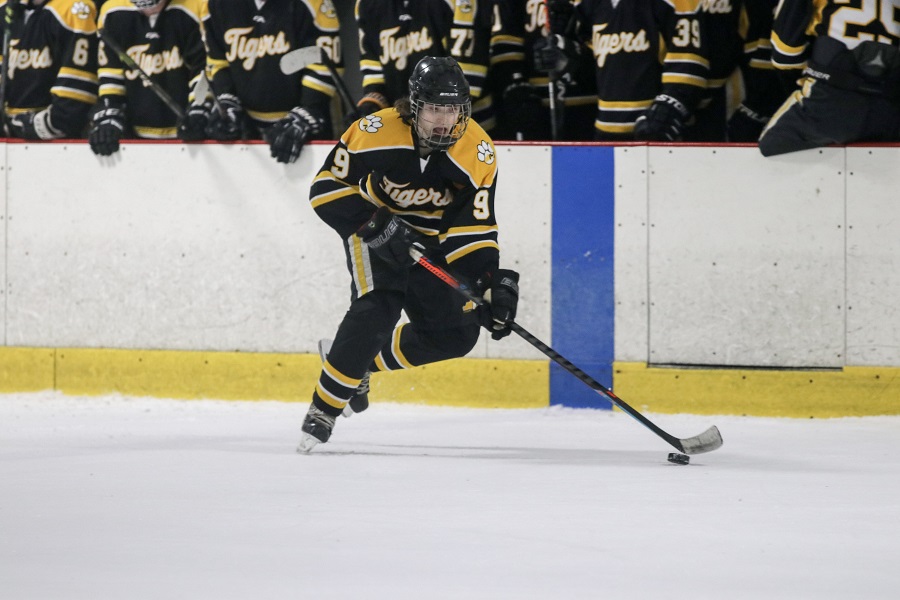 Coming off a hard-fought, come-from-behind win in overtime against Seneca Valley just one night earlier, the North Allegheny ice hockey team was upended at Upper St. Clair on Tuesday night, 5-2.

The Tigers fell behind 2-1 in the first period on goals by USC’s Brady Buonomo and Zach Fairfull. NA’s lone marker in the period came from Austin Peterson, assisted from Matt Irvin.

After a scoreless second period, the Panthers opened up a 3-1 lead thanks to a power play goal from Mitch Geinzer at the 2:22 mark of the period. Needing to rally back for a second straight night, the Tigers started a comeback bid when Trey Gallo netted his seventh goal of the season, assisted by Kyle Holmes, trimming the deficit to 3-2 at the 6:52 mark. Unfortunately for NA, that’s as closed as it would get in this one as USC pulled away with a late goal from Collin Ruffner and an empty net marker from Geinzer to close out a 5-2 victory.

In net, Jake Fisher earned the win with 30 saves for the USC. Josh Bailey played well for NA despite the loss, making 28 saves.

North Allegheny falls to 12-4-2 on the season and remains in a tie for second place with Pine-Richland with 26 points. Upper St. Clair improves to 9-8-1 and sits in fifth place in the Class AAA standings with 19 points. The Tigers look to rebound on Monday night with an important meeting with Pine-Richland.