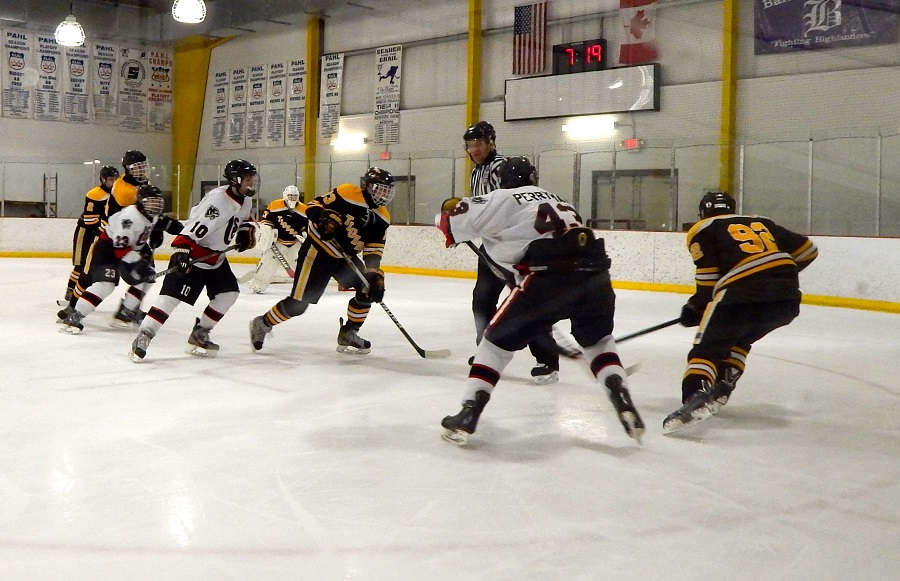 Junior Joseph Zappia’s second goal of the night proved to be the game winner as North Allegheny outlasted the Upper St. Clair Panthers on Monday night, 3-2. On the road at the Ice Castle, Zappia broke a 2-2 tie in the third period with a goal with 4:14 remaining to lift NA to the victory.

A first period power play had the Panthers in front early when Jake Reinheimer converted the man advantage into a 1-0 USC lead. The Tigers evened the score on Zappia’s first tally of the evening at the 13:58 mark of the period and the score was tied, 1-1.

In the second period, Dominick Zangaro netted a short-handed goal to give North Allegheny a 2-1 lead with 3: 25 remaining in the period.  Just one minute later, the game was knotted again when Kasey Colcombe scored for the Panthers and the contest headed to third tied, 2-2.  Zappia’s second goal put the Tigers ahead for good in the third period.

In a very competitive game, Upper St. Clair outshot North Allegheny, 30-25, but Tigers goalie Joe Hubert made 28 saves to hold off the pesky Panthers.  USC’s Adam Seeton made 22 stops on the night.

North Allegheny improves to 4-1 on the season and climbs into a first place tie with Bethel Park, both sitting atop Class AAA with eight points. Upper St. Clair drops to 1-3 overall. The Tigers have a week off before visiting Mt. Lebanon next Monday night.