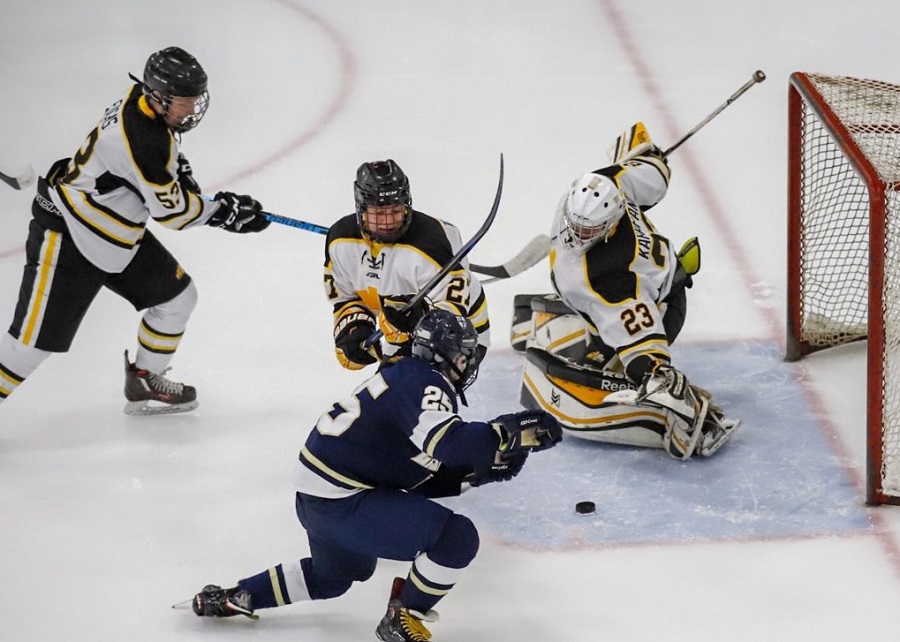 The La Salle College Explorers survived a furious North Allegheny rally and scored three goals in the third period, including two empty-net goals, for a 6-3 victory over the Tigers in the Class AAA Pennsylvania Cup final. Sophomore Sam Lipkin netted a hat trick and scored a crucial short-handed goal in the third period to help the Explorers navigate to a sixth Pennsylvania Cup title.

La Salle’s quick-strike ability was on display in the first period as Lipkin gave the Flyers Cup champions a 1-0 lead 20 seconds into the game.

North Allegheny weathered the early storm and evened the score at 1-1 on a Tyler Putnam steal and breakaway goal at the 8:30 mark of the first. La Salle struck back just 28 seconds later on a marker by Michael Casey for a 2-1 advantage.

The Explorers expanded the lead to 3-1 at the 3:24 mark of the second period on another goal by Casey, assisted by Providence College commit, Daniel Sambuco.

As the physicality of the game picked up in the second period, so did North Allegheny’s intensity as the Tigers put together a frenetic comeback to tie the game. North Allegheny cut the deficit to 3-2 at the 13:10 mark of the second period when Haden Shimko sent a puck behind the La Salle net that caromed off the boards to senior Aaron Miller, who banked the puck off La Salle’s sprawling goalie, Aiden McCabe.

The Tigers carried that momentum into another goal with just 1:40 left in the second period as North Allegheny broke loose for a 3-on-2 rush. Junior Tyler Lamark crossed the blue line and dropped the puck to senior Luke Turkovich, who made a great move past one defenseman and sent a perfect pass to Miller on the doorstep for his second goal of the game, and sixth of the playoffs, to knot the score at 3-3.

A cross-checking penalty by Sambuco at the 6:22 mark of the third period set the table for North Allegheny to take its first lead of the game. However, La Salle College not only killed the penalty but scored on a short-handed goal by Lipkin to swing the pendulum back toward the Explorers, 4-3, with 9:21 remaining in the game. La Salle scored two empty net goals in the waning minutes, one by Sambuco and one by Lipkin, to close out a 6-3 win.

Congratulations to the North Allegheny ice hockey team and head coach Mike Bagnato and his staff for a memorable 2018-2019 season. For their play in the Pennsylvania Cup final, and throughout the season, the North Allegheny senior class of Aaron Miller, Nathaniel Heil, Justin Symons, Vincenzo Mazur, Richie Karapandi, Luke Turkovich, Tyler Duderstadt, Sean Parks, Haden Shimko and Dylan Watkins were all recognized as the Wright Automotive Players of the Game.